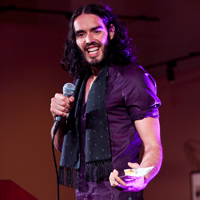 Of course, by libraries those leaders and artists didn’t necessarily mean the brick-and-mortar structures themselves—72 of which dot the streets of Los Angeles and serve some 90,000 kids every day. To the Young Literati, a society of 20-to-40-somethings who engage in literary-minded pursuits, democracy depends on what these libraries stand for: free and public access to boundless knowledge.

“Libraries are the path to citizenship,” said Ken Brecher, president of the Library Foundation of Los Angeles, at the start of the night.

Garcetti’s was probably the most literary selection of the night. Indeed, each of the reader’s choices played into their public persona, and the night became an eclectic, politically-tinged mix of comedy, advocacy, and drama.

Fairey picked a not-so-great but still entertaining Ray Nelson short story called “Eight O’Clock in the Morning,” about a man who’s convinced his society is run by alien creatures in disguise. Philipps—you might know her as Laurie Keller in Cougar Town—also chose a short story, “A Telephone Call” by Dorothy Parker. In it, a crazed girl desperately waits for a boy to call her, and Philipps’ hyper-committed, monologue-style recitation won a lot of laughs.

Martin, a Daily Show contributor and Comedy Central regular, had some people laughing so hard they cried with his selection—that great book of comedy, the dictionary. “There’s something fun about a dictionary to me,” he said, admitting sheepishly that he takes dictionaries with him on long plane rides. He then proceeded to riff on the sample sentences from several unlikely entries, including “dictionary” itself, “alphabet,” “linger,” “crotch,” and “form-fitting.”

Silverman played it safe with a sweet e.e. cummings poem, and the two musicians flexed their political muscles with heavier material—Rollins took his cue from history and Densmore drummed out a stylized rendition of Ethridge Knight’s “The Bones of My Father.” Russell Brand, overcoming a power outage that threw the stage into permanent shadow, capped the night with a crazy-brilliant improvised recap of everyone’s performance and an animated reading of Oscar Wilde’s children story, “The Selfish Giant.”

The whole time, the theme of the evening shined through—that the library really does offer something for everyone. Rollins, in his powerfully articulate rant, probably put it best: “What is mine is good, but what is ours”—signaling the space around him—“is completely great, and very worth preserving.”