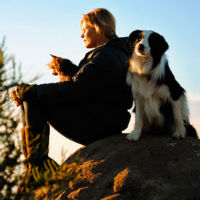 The legend of Ernest Hemingway is one of the most lionized in literary history: A tortured artist whose Faustian genius came at the price of his own sanity, he killed himself in 1961 at age 61. The glorification of suffering in pursuit of great art often ignores the toll of mental illness and suicide, both of which have afflicted several generations of Hemingway’s family.

The new documentary Running From Crazy, directed by Academy Award-winner filmmaker Barbara Kopple and executive-produced by Oprah Winfrey, dismantles the history of the Hemingways through the experiences of the author’s granddaughter. Actress Mariel Hemingway began her career at age sixteen, starring in the 1976 revenge drama Lipstick with her older sister Margaux. Two years later she was cast as Woody Allen’s teen girlfriend in Manhattan, a performance that earned her an Academy Award. Since the 2002 publication of her memoir Finding My Balance, Hemingway has focused on promoting spirituality and wholesome living as a path to mental health. In the documentary she delves into her painful past, revealing new details about Margaux’s 1996 suicide and her sister’s obsession with their dark family legacy.

Mariel has a different obsession. These days, she is an outspoken advocate for suicide prevention who has dedicated her life to clean living, which for her means an active life of hiking, complex and carefully proportioned smoothies at every meal, and absorbing the first sunlight each morning. She follows the daily practice with religious fervor. The intensity of her pursuit for inner peace is understandable. “I come from seven suicides. Perhaps more,” says Mariel Hemingway of the tragic birthright that she chronicles in Running From Crazy.

Running From Crazy premieres in select cities on November 1.