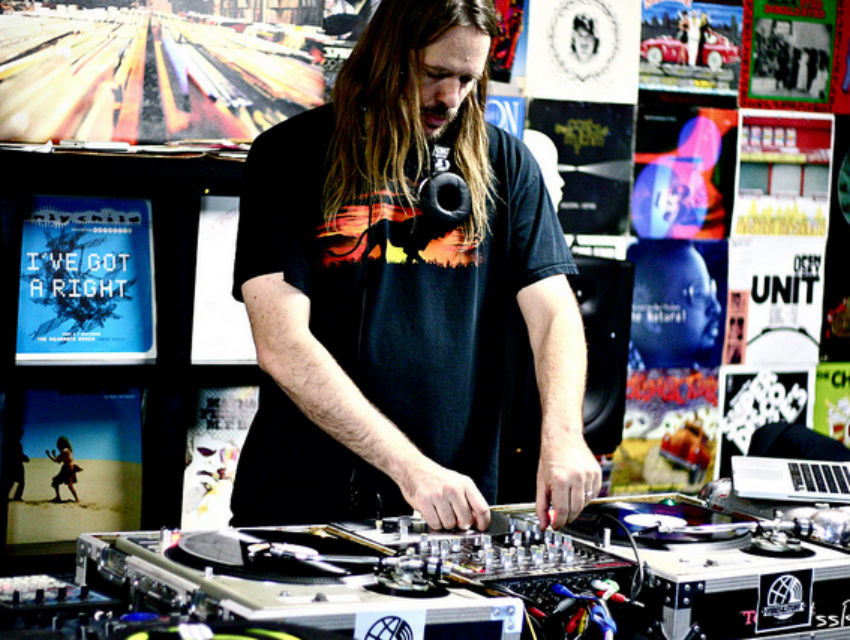 There’s literally no musical genre that Tom Chasteen hasn’t spun on his turntable. The DJ, producer, and co-founder of Dub Club, an internationally renowned Wednesday night reggae and dub dance club held at the Echoplex, has been a mainstay on the L.A. music scene for over two decades. Now in his early forties, Chasteen, who grew up in upstate New York, made his way to L.A. in the ‘80s to attend CalArts, and started seminal electronic dance music label Exist Dance in 1991, is gearing up to release his fourth full-length album on October 28. Natural Numbers is the second of a series Chasteen is releasing through Stones Throw Records, the follow up to last year’s Foundation Come Again, an homage to classic reggae and dub with Chasteen’s decidedly California touch, which featured among others underground DJ legends Ranking Trevor and King Stitt. “I like the classic Jamaican sound, but I’ve realized at this point that I’m not Jamaican and I never will be,” Chasteen says. “I like to mix it up with different styles. I don’t pretend I’m anyone other than myself.” Chasteen has a few thoughts about his new album, the reggae underground in L.A., and his wildly successful club nights. ★ Chasteen has appeared as a producer and DJ on many recordings, but Foundation Come Again was his first attempt at launching his own musical vision as opposed to curating obscure tracks and cuts from rare recordings or producing other reggae artists. ★ “I’ve been producing dub and reggae for a while, but it’s a new experience producing dub music that is original and not just recycling older Jamaican music,” he says. ★ Natural Numbers has an old school Jamaican reggae vibe, with all of Chasteen’s musical idiosyncrasies woven in. “I’ve always had a wide range in musical influences. I started with punk and then moved on to dance music in the early ‘90s,” he says. ★ He founded Dub Club with electro-surrealist Eddie Ruscha (son of iconic L.A. artist Ed Ruscha) and DJ Jason Mason in 2000, wanting a club night that would take reggae back to its performative roots. “A lot of events in town advertised dub, but when you’d show up it would just be a dance party. We wanted to bring back the classic sound in a club setting.” ★ Chasteen also wanted to feature toasting on the mic, a mainstay of reggae shows in Jamaica. “It’s rapping, basically. At Dub Club we’ll play a record and then play the instrumental part only, and one of the MCs will rap over it. You go from DJing to rapping and back and forth. It’s all one improvisational performance.” ★ Dub Club’s success has garnered Chasteen and Co. plenty of attention from the music press; Rolling Stone ran a piece last year about how California is turning into an epicenter for reggae and dub music, not news to Chasteen. ★ L.A.’s vast musical offerings have influenced the reggae underground for years. “There’s a pretty big scene here and it’s diverse because of the city’s diverse population,” Chasteen says. “The wide ethnic mix of Los Angeles lends itself really well to reggae.” ★ Although his sets at Dub Club feature deep cuts and obscure artists from the annals of reggae history, Chasteen’s philosophy as a DJ is eclectic without being alienating. And he’s definitely not a music snob. “I’ll play something obscure,” he laughs. “And then the next song will be ‘Red Red Wine.’” Check out Dub Club every Wednesday, 9 p.m. at the Echoplex and pick up Natural Numbers when it lands October 28.

Rock Your Way Into the New Year