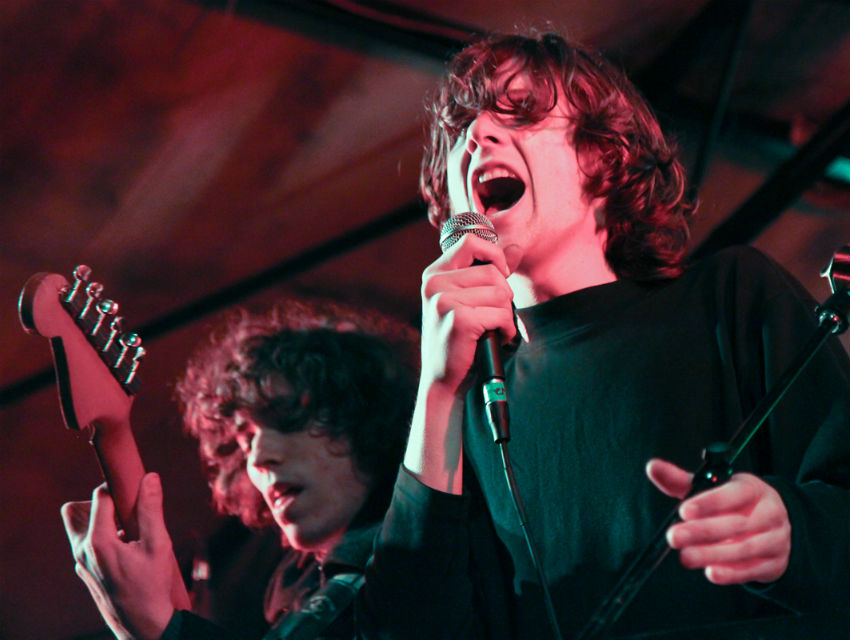 Foxygen’s critically acclaimed debut album We are the 21st Century Ambassadors of Peace & Magic came out in 2013 but it might as well have been recorded in the late ’60s. If the album’s title doesn’t sound Beatles-y enough for you, singer Sam France’s Jaggeresque vocal swagger will take you back.

The local duo came of age in the San Fernando Valley, a place guitarist Jonathan Rado says has been hugely influential on their music. “It still feels like the ’70s there. It hasn’t changed that much. I love driving down to the end of Ventura Boulevard at night when all the shops are closed. It’s like a Paul Thomas Anderson movie.”

Rado’s rhapsody on Ventura works as an analogy for the band’s output. Listening to Foxygen’s brand of guitar-driven pop can make you lose sense of time and place. Oscillating between straightforward blues rock, psychedelic pop, and reverb-heavy vocal passages reminiscent of Lou Reed, Foxygen’s sound is oddly measured, like a rock tumbler diligently rattling its contents over the course of a long summer afternoon in a suburban rec room.

Foxygen’s new double-album … And Star Power, out Friday, is a concept album about concept albums, and it pushes the envelope further. We spoke with Rado about growing up in the Valley, his love for easy listening, and how hard it is to get a hold of Paul McCartney when you need him.

Foxygen has Been Around Since France and Rado Were in High School
The duo grew up in Westlake Village, and they’ve been playing together for nine years, since they were both fifteen. “In high school we’d play the Whiskey a lot. It was ridiculous. It would only be family and friends watching us. We did pay-to-play shows because we thought that’s what you do when you want to have a band.”

It’s Always Been Just France and Rado
Foxygen performs live with a seven-man backing band. “Our live band plays on a few of the songs on the album, but mostly it’s just me and Sam,” says Rado. “Our shows are intense, but I always think of Foxygen as a recording band because we work best in the studio.”

The New Album is Centered Around Foxygen’s Fictional Alter-Egos, Star Power
“It starts out as a classic Foxygen album and then it’s gradually taken over by this band called Star Power. They’re from space. Maybe. I don’t know. It’s a loose concept.”

The Band Invited Paul McCartney to Appear on the Album
The former Beatle was extended a formal invitation to appear on … And Star Power, but he declined. “He plays drums on his solo albums McCartney and McCartney II and Band on the Run by Wings and he’s a killer drummer,” says Rado. “Of course it was never going to happen but we thought we’d reach out. If we were the Foo Fighters he would have probably done it.”

Foxygen Doesn’t Poo-Poo Soft Rock
Many critics have remarked on the fact that Foxygen’s new album has a certain Todd Rundgren flavor to it. That’s not a coincidence, says Rado, a big fan of smooth ’70s songsmiths. “When I was a kid my parents would play Fleetwood Mac and Heart all the time,” he laughs. “In high school both Sam and I were really into Flaming Lips and Beck. But now we’re back to ’70s easy listening.”

Check out Foxygen’s brand new video “Coulda Been My Love” below.

5 Questions for Foxygen, the Little Neo-Psychedelic Duo that Could