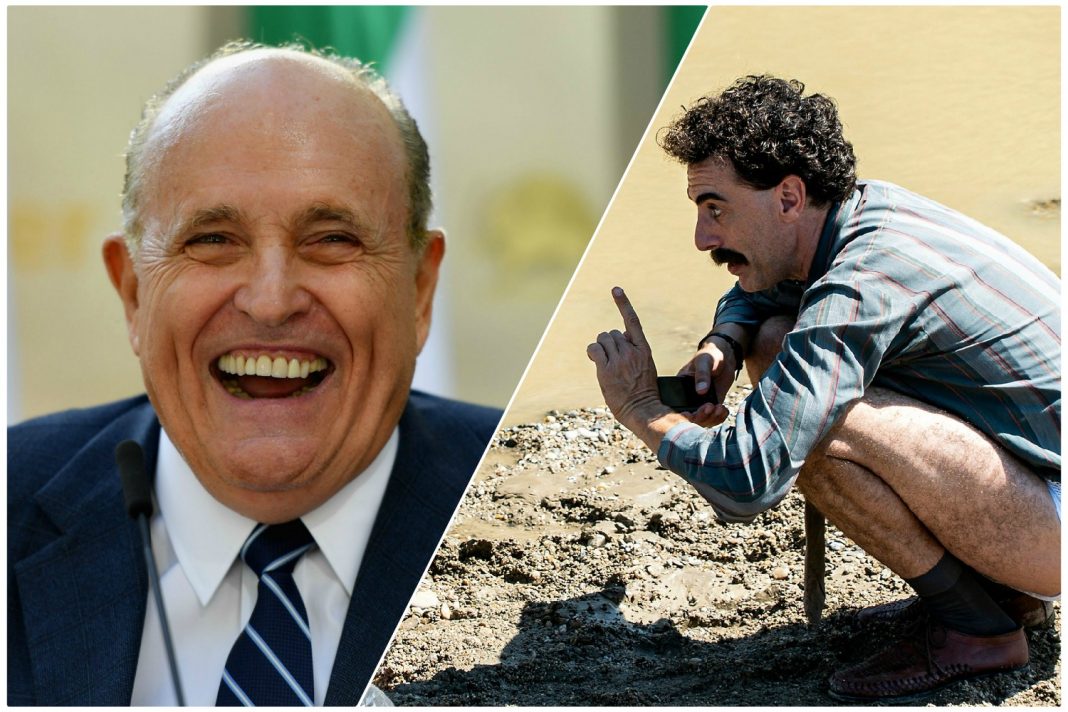 When Donald Trump’s personal lawyer, Rudy Giuliani, wasn’t traipsing across Eastern Europe trying to find dirt on Joe Biden, he was busy getting caught on film making a fool of himself by Sacha Baron Cohen for the upcoming Borat Subsequent Moviefilm.

As the Daily Beast reports, the film centers on Borat Sagdiyev’s return to the U.S. at the behest of his overlords in Kazakhstan in order to get his young daughter, Tutar—played by 24-year-old actress Maria Bakalova—married to someone in Trump’s inner circle.

Borat eventually chooses Giuliani, explaining, “Luckily I discover his preference for womens with ample cheese-producing capacity,” in reference to a New York Post article that claimed Giuliani had “been bragging to pals about having an affair with a married woman with ‘big boobs.’”

To bait the trap, Tutar poses as a TV journalist and lures Giuliani to a Manhattan hotel suite for an interview, during which she flatters Giuliani until he says, “I’ll relax you, you want me to ask you a question?” Tutar giggles, Rudy blames the pandemic on China, and agrees to “eat a bat” with her.

Cohen then breaks things up, entering the room dressed as a sound engineer, and leaves before Tutar suggests that she and Giuliani “have a drink in the bedroom.”

The pair then retire to the bedroom, which is rigged with hidden cameras, Rudy has a scotch—and that’s when things get weird.

Giuliani removes Tutar’s microphone and asks for her phone number and address as he sits on the bed. He then pats her buttocks as she removes the microphone from his pants. He then lies down on the bed, shirt untucked, starts reaching into his pants and is, according to the Guardian, “apparently touching his genitals.”

Borat then bursts into the room, shouting, “Put down your chram! She’s 15! She’s too old for you!”

The shaken Giuliani scrams in a jiffy, with Borat calling after him, “Rudy, Trump will be disappoint! You are leaving hotel without golden shower!”

Giuliani had previously called the cops on Cohen this summer when the actor arrived for a hotel interview dressed in what Giuliani called “a transgender outfit… It was a pink bikini, with lace, underneath a translucent mesh top,” but it’s unclear how, exactly, the incidents are related. At the time, Giuliani bragged that Cohen had failed to “get” him, but now it appears he was woefully misinformed.

Giuliani didn’t respond to the Guardian’s request for comment and, as usual, Twitter got the last word.

Prolific Trump critic George Conway seems to have gotten the ball rolling this afternoon, urging users to, “Do a search right now on this website for Giuliani and Borat. Don’t ask. Just do it.”

Do a search right now on this website for Giuliani and Borat.

Washington Post columnist Catherine Rampell noted that the footage may slightly weaken Giuliani’s assertions that he and Trump are not useful idiots for foreign governments.

impossible for the Russians to be manipulating Giuliani, say supporters of man who was apparently hoodwinked by <checks notes> Borat

And David Corn has high hopes about today’s news.

Did Borat just save American democracy?https://t.co/HlCZC3irSx

Giuliani has since claimed via Twitter that the video is a “complete fabrication,” which he attempted to bolster by pointing out that the Rupert Murdoch-owned New York Post said the clip “looks like an exaggeration through editing.”

Guess you’ll have to see for yourself. Borat Subsequent Moviefilm premiers on Amazon Prime this Friday, October 23.