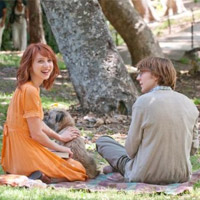 Ruby Sparks, Dayton and Faris’ first film since the Oscar-winning Little Miss Sunshine, is not only a surprisingly nuanced indie romance but also a visual valentine to our city. The story follows neurotic writer Calvin (Paul Dano), whose early success has led to a case of impenetrable writer’s block. He finds inspiration in Ruby Sparks (played by Dano’s real-life love Zoe Kazan), an imagined dream girl who he wills into life. Though L.A. native Kazan (she’s the granddaughter of Elia Kazan and the daughter of Nicholas Kazan) wrote the screenplay, the film never directly acknowledges the city in which it takes place. Regardless, anyone remotely familiar with Los Angeles would recognize the various backdrops—the 405, Los Feliz, Griffith Park—in an instant.

This past Friday, the Hammer Museum (another landmark that makes a cameo) hosted a sneak preview followed by a Q&A with Dayton, Faris, Kazan, Dano and co-star Chris Messina. Being the L.A. lovers that we are, we asked them to tell us which of the film’s locations were their favorites and why.

1. Calvin’s House
Both Dano and Faris favored the gorgeous Griffith Park home in which most of Ruby Sparks takes place. While scouting locations, they had a specific vision in mind. “We wanted something inspired by the 1980s, something with arches and glass and brick,” Dayton said. “It had to be perfect, because the house is as much of a character in the film as Calvin and Ruby.” They eventually found a home that they liked but couldn’t commit to, so they called the architect. “It ended up being a Fitzgibbons,” Dayton said. They looked at every other J. Frank Fitzgibbons-designed home in the area. “In the end,” Dayton said, “we ended up going with the home the architect designed for himself.”

2. The Billy Wilder Theatre at the Hammer Museum
It was strange to sit in a theater watching a movie that was shot in the space where we were sitting. (You follow?) The Billy Wilder Theatre was the setting for a scene in which an audience lobs questions at Calvin during a Q&A; the situation couldn’t have been more meta. “I liked the Hammer the best because it was the most different [on film] from what I imagined,” Kazan said. “I had originally set that scene somewhere else, but you guys suggested here,” she said, turning to Dayton and Faris. She went on to mention that the theatre’s unique lighting scheme, a series of horizontal LED lights, looked spectacular on film. “It’s just very cool to look at,” she said.

3. The Big Sur House
The Big Sur house was the favorite filming spot of both Messina and Dayton. And when we say Big Sur, we mean Laurel Canyon. “We actually filmed those scenes at Sid Krofft’s house,” Dayton said. That would be the Sid Krofft who with his brother Marty created Land of The Lost and H.R. Pufnstuf in the 1970s. Unsurprisingly, he has one of the more unique homes in Los Angeles. Constructed with bricks from a Catholic schoolhouse and wood from Amish farms in Mexico, the house looks like it has been turned inside out: flora and fauna overtake most of the interior, creating a kooky home for Calvin’s New Age, granola-eating mom (Annette Bening) and her slightly psychedelic husband (Antonio Banderas).

Ruby Sparks opens tomorrow, Wednesday, July 25, at Arclight and Landmark theaters. Keep your eyes open and you’ll spot other L.A. locations like Wonderland night club, Skylight Books, Hollywood Forever Cemetery, and Figaro Bistro. Maybe the film will inspire you to write a love letter of your own.