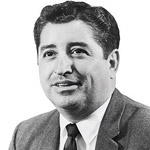 How did Salazar influence 20th-century thought?
As a journalist, he embodied many of the shifts of that century, exchanging the stoicism and conservatism of the Greatest Generation for boomer entitlement and idealism, without buying into either.

What does Salazar mean to you personally?
The story of his eventful life and his demise at the hands of law enforcement influenced Mexican American identity for a certain generation. You could say he’s the Chicano Anne Frank.

What about the private man?
His family gave us access to his personal papers, which showed that he was thoughtful, skeptical, and conflicted about many things. He was also deeply principled and courageous.