Home Film Ruben Östlund Got the Idea for His Golden Globe-Nominated Force Majeure From... 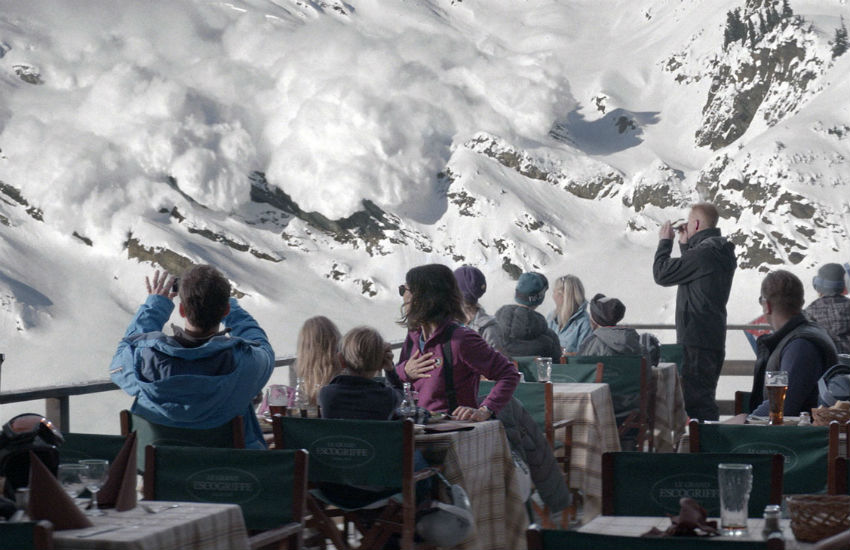 For years, Swedish director Ruben Östlund’s work has been gliding just under the mainstream radar. He’s been a film festival darling since the beginning of his career, but it was in 2014 that he truly broke out. That was thanks to his acclaimed Force Majeure. Since its premiere at last year’s Cannes (where it won the Jury Prize in the Un Certain Regard section), the movie has been almost universally loved. It’s nominated for the Golden Globe for Best Foreign Language Film and is Sweden’s submission for the Oscar’s foreign language category—and it made the Academy’s shortlist.

Force Majeure is Östlund’s first feature to get theatrical distribution in the US. But this year, the Comeback Company has put together In Case of No Emergency, a touring retrospective of Östlund’s work. The tour begins right here in Los Angeles, with a screening of Force Majeure and a personal appearance by Östlund this Friday at Cinefamily, which will continue to screen his works throughout the month.

“I’m very interested in dilemmas, in situations that we can all identify with, but which we also understand would be hard to handle,” says the forty-year-old director. Force Majeure is set at an upscale ski resort in the Alps, and follows a Swedish family as their weeklong vacation goes horribly wrong. The setting is hardly unfamiliar to the director, who got his start in cinema working on skiing films. He considers that early work good practice for his later career: “On the ski films, we were shooting for a hundred days each winter. So I had a lot of experience shooting in snow and in the alpine environment. You get a certain stamina when you work in that way—I was the cameraman, the only one in the crew.”

Force Majeure had been circling Östlund’s brain for years, but he could never find the right idea to match it. “It’s kind of hard, because a ski resort is such a kitschy place. Everyone is dressed in neon colors, and they are all in control of their lives, so it was hard to come up with a topic that was interesting enough,” he explains.

Östlund needs a single idea to start off with before he can write a screenplay. As he puts it, “With my scripts, dilemmas are the starting point. Everything is developed around them. My approach often is from a sociological perspective, and I’m very interested in sociological investigations.” Without the proper impetus, he had no plot for his hypothetical ski resort film.

That all changed the day Östlund watched a certain video on YouTube. “It was this clip of a group of tourists sitting at an outdoor restaurant. They see an avalanche coming towards them, but it’s only the harmless snow smoke that reaches the restaurant. But they don’t know that, so they all run away. And then they have to go back to their seats, and they’re kind of shamed by their behavior, that they lost control over themselves. It’s that shame I am interested in.”

This incident is recreated in Force Majeure, but with a twist. “I told a friend of mine about the video, and how I had the idea of a family eating at that restaurant. And he thought about it, and said, ‘What if the father runs away, but no one else? And only he has to come back to the table, to his wife and his kids?’ And right here, we have a dilemma to base a film around.”

Force Majeure uses this event to upend the dynamics of its main family, and in the process, it examines how humans handle their socially-mandated roles, and what happens when they can’t live up to them. Along the way, there are many little moments of realism in the interactions between the family members. Östlund culled some of those from reality.

“I take a lot of inspiration from my own life, from the experiences I have of relationships, and what friends have told me about their relationships,” he says. “There’s a scene in Force Majeure where a woman walks up to the main character and tells him, ‘My friend says you’re the most good-looking man in the whole restaurant.’ But then she comes back a minute later and says that she made a mistake, her friend wasn’t talking about him. That’s something that actually happened to me.”

“In Case of No Emergency: The Films of Ruben Östlund” kicks off Friday at Cinefamily with a screening of Force Majeure introduced by the director in person.