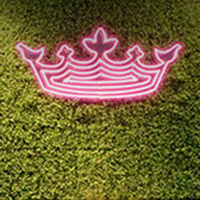 Royal/T, the combination cosplay café and gallery space, is celebrating its metamorphosis from a brick and mortar space to a more temporal incarnation as a pop-up art collaboration. The Culver City gallery will close on Saturday, June 30. Before it goes out owner Sue Hancock and several artists with whom she has collaborated are throwing one last shindig to celebrate the gallery’s greatest hits.

“There is no way to just have a brick and mortar space anymore,” Hancock explained via email. “Visibility is key, you cannot be in one place, you need to find a way to be everywhere.” She hopes a pop-up in conjunction with an online presence will allow Royal/T “to bring the magic to more people all around the world!”

In the past five years, the space has hosted 12 exhibitions and countless Sunday brunches, drawing a diverse crowd of families, cosplay fans, and art enthusiasts. Working with Hancock’s impressive personal collection of Japanese themed art pieces, Royal/T helped keep pop art where it belongs: in the public eye.

Unfortunately for Royal/T’s many fans, this Saturday will be its last supper. The event, aptly named The Greatest Hits Party, will feature a retrospective of the café’s whimsical exhibitions including The Never Ending Story: Fairytale, Fantasy, Obsession curated by Laura Hoptman/MoMA NYC, Three Apples Hello Kitty 35th Anniversary Celebration curated by Jamie Rivadeneira, Japan LA, and TAG you’re it! curated by Amber Noland. Expect appearances by the many friends of Royal/T such as Eric Shiner, director of The Andy Warhol Museum, Jane Glassman of ARTeamLA, and Hello Kitty herself.

Maintaining a playful spirit in both the gallery and café was paramount to Hancock, who always envisioned Royal/T as a place of accessible magic. “We wanted people to feel like Alice falling down the rabbit hole,” Hancock said. “My goal was to create a relaxed atmosphere that would inspire young generations to be comfortable around art and reinvigorate jaded art viewers.”

L.A. native and former Royal/T creative director Marcella Zimmermann was one of the many people who credits the gallery for her introduction to the art world. “Royal/T was too cool to be cool. Unpretentious and fluid, it was an extension of the breezy, DIY, whatevs attitude that makes Los Angeles great,” Zimmermann says. She currently resides in New York City, where she and Hancock will collaborate on a project in the fall.

“As creative director of Royal/T, I tried to keep to the spirit of Susan’s art collection while producing projects and events that I thought would be fun and engaging. For example, I booked FIDLAR and invited the Coolhaus ice cream truck to the opening of the Party Animals exhibit because I like punk music and ice cream.”

The Greatest Hits event kicks off at 8 p.m. with a meet-and-greet tour, but the real celebration start at 9 p.m. when drinks and desserts come out, followed by performances by Prince Poppycock and DJ Dave Mueller. To cap off the night, there will be a midnight toast honoring Royal/T’s five fabulous years. Here’s three cheers for the gallery and a sincere wish that it’s the last Los Angeles art space to go under.