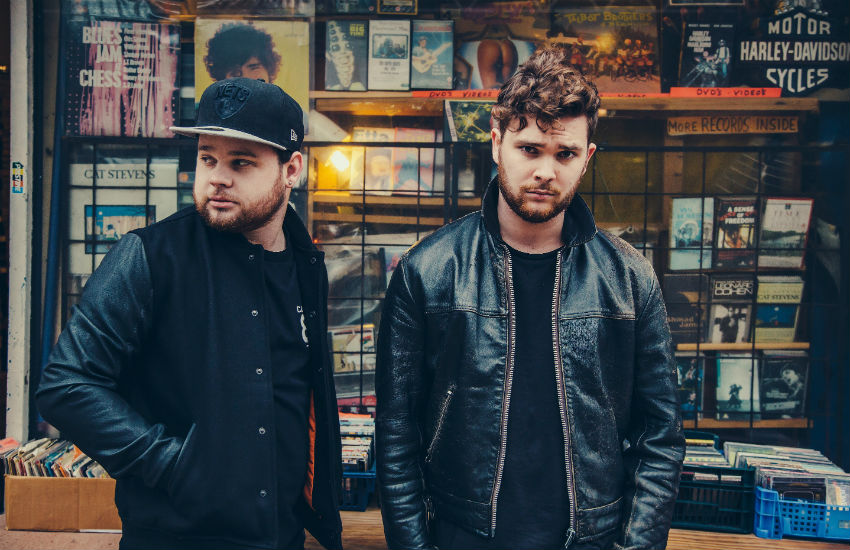 For every ether-swigging, supernaturally talented young group blazing a trail in rock and roll over the last five decades, there has been someone on their heels hailing the death of rock. From countless forlorn critics to the God of Thunder himself, Gene Simmons, “rock is dead” has become the rally cry of the old establishment. Even if any of that were true, the UK’s Royal Blood surely hasn’t received the memo.

Brighton, England’s duo of Mike Kerr (vocals, bass) and Ben Thatcher (drums) has been making waves here in the States with 2014’s eponymous debut album—a bottom-heavy juggernaut of tightly crafted songs, pounding percussion and menacing riffs in the vein of Black Sabbath and Queens of the Stone Age. They earned an invite to tour with the Foo Fighters this year by their hero Dave Grohl, they were nominated at home for a Mercury Prize and Brit Award, and this April they’ll make their Coachella debut. The guys sat down with us backstage in L.A. recently to talk about their success, their upcoming plans and their idea of the perfect Coachella hologram.

You two make a lot of sound for two people, especially without any guitars. What are your influences?
Mike Kerr: Each other. We listened to similar bands growing up. Things that wouldn’t surprise you, like Nirvana, Queens of the Stone Age.

What’s your favorite QOTSA record?
MK: Oh, don’t ask me that!
Ben Thatcher: Songs for the Deaf, straight up. Grohl’s drumming on it. It’s got all the pop hits. It’s got the best drumming. You can’t listen to that album and not air drum.
MK: I still refuse to answer, but they’re a band that, from the simplicity of the first one to the journey of the last one, everything in between has been about just making sure it’s fucking good.

What was your reaction to learning you’ll be on the bill with the Foo Fighters on their upcoming tour?
MK: What’s great is that Dave chooses who he brings out, so it’s incredible to be personally invited by one of our personal heroes. If it wasn’t for his music, our band wouldn’t sound the way it does.

If you hadn’t been nominated for the Mercury Prize, who would you be rooting for?
BT: Jungle.
MK: We listen to Jungle nearly every day.
BT: Jungle’s just a very consistent album. A lot of sounds are very similar, but it’s an album you can put on and it’s brilliant (start to finish).
MK: That’s what an album should be, really.

With the importance of the digital single now, good albums are becoming more rare. You seem to have made a cohesive record, like you were focused on the record while you were writing.
BT: We weren’t. We wrote in stages. We weren’t actually writing an album, we were just writing the best songs we could that month. This first album was written in our own time, in our own space. I think we wrote about sixteen songs and then chose our favorite ten out of them. Maybe not our favorite ten, but the ten that worked best for an album.
MK: Yeah, we recorded—and this is all coincidence—not only in order of composition, but in order of [studio]. We did it over three studios. The first studio we did it in was the cheapest studio around and we did it at the cheapest time of year possible.
BT: Yeah, between Christmas and New Year’s (in England).
MK: When everyone’s out buying sofas from DFS. That’s the time to strike.

When you’re home in England, what do you like to do?
BT: We’re never home. Literally, we’re never home. Our home at the moment is on a bus or an airplane or a venue. That’s kind of how it’s been this whole year. Home, for us, is where we keep the clothes we don’t actually wear.

You’ve toured the States a few times. Do you have a favorite city in America?
BT: There’s too many brilliant cities in America. For us, England is the size of a state here.
MK: New England in America is bigger than England.
BT: There you go. Everywhere we go is brilliant. We have so much fun in America, just touring around it and seeing different places and playing to different people.

What about favorite venue? We’re sitting where Led Zeppelin once played.
MK: I kind of avoid that mentality. With a show, half the fun is you don’t know who’s coming or what’s going to happen. You can play an amazing venue with all this heritage and have a shit time. Or you can play an absolute shithole in the middle of nowhere and that’s more often than not where we’ve had some of the greatest experiences.
BT: Definitely.
MK: I can never compare city-to-city, let alone venue-to-venue. That’s the whole point. It’s like throwing a party. You can do everything in your strength to make sure it’s the best party possible, but you don’t know if it’s a success until you’re sweeping up the next morning.
BT: Yeah, and what I find about America is people really travel to come see you, as well, because it’s so big. When we play maybe one city in a state, everyone from that state or just outside comes to it. They make that effort and it’s an overwhelming feeling to know those people are making the effort to come to your show to see you. It’s great. That’s what it’s about, really.

We’ll see you back in California for Coachella. If you could have a hologram of any artist, living or dead, who would you choose?
MK: Picasso. Big fan of his artwork. It’d be great.
BT: James Brown.
MK: I wish one had painted the other. I wish James Brown had painted Picasso.