Home Celebrity Rooting for the Home Team with Mila Kunis 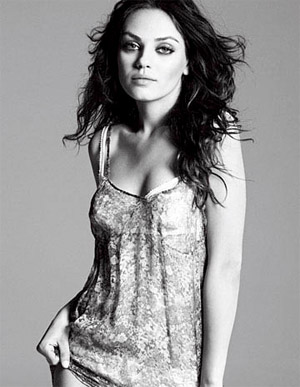 “I love the Big Blue!” sings Mila Kunis as the Dodgers saunter off the field and the Cincinnati Reds swallow another runless inning. Kunis isn’t just paying lip service. She had arrived at the game wearing a sleeveless Dodger jersey over her black tank T-shirt and jeans—baggy, torn at the knee, rolled to midcalf, and quite possibly borrowed from the closet of her boyfriend, Macaulay Culkin. Presented with a Dodger cap, she promptly pulled it down over hair still wet from a shower and lost no time ordering a hot dog and a root beer, the color of which matches her nail polish. Kunis is no stranger to a ball game. “But this is not where I normally sit,” she says of our front-row VIP seats. “This is not where my peeps roll. I’m usually way up there.” She points to the crowd roaring from the upper tiers.

Kunis insists on taking care of our snacks. It’s not a feint; it’s an unassailable command. “I’ve got this,” she says to the vendor. “Don’t take her money.” In a lot of years of celebrity interviewing, I don’t need all of one hand to count the times the subject has offered to pay. “Then you’ve been interviewing some pathetic celebrities,” Kunis says. “And besides, I’m not a celebrity. I’m a working actress. There’s a massive difference.”

In widening circles she is both. TV audiences who missed her eight years as Ashton Kutcher’s girlfriend Jackie on That ’70s Show might recognize her voice from Family Guy instead: For its entire run, and in movie spin-offs, she has portrayed Meg, the long-suffering, eye-rolling daughter on Fox’s animated alt-comedy that is up for an Emmy this month. Last year she starred in Forgetting Sarah Marshall as the irresistible hotel receptionist who saves Jason Segel from abject humiliation when his ex-girlfriend checks into the same resort with her hypersexed musician boyfriend. “I know you’re famous,” says the woman with a fill-me-in smile sitting next to Kunis at the stadium. The actress assures her she’s nobody the woman should recognize. “My son is sitting over there in the stands,” the woman persists. “He’s 14. I know he would know you.” Kunis obliges with an autograph. “Your mom thinks you might know who I am,” she writes in large feminine script, a cartoon heart hovering over the i in “Mila.”

The enormous eyes, full mouth, and cascade of dark hair give Kunis the look of a diminutive—five feet four and 110 pounds—and approachable Angelina Jolie. Her effervescence and unbridled laugh belong to an unselfconscious five-year-old. She’s a knockout of a tomboy who shared dressing rooms with her male ’70s Show costars, and she’s also a girl’s girl whose best friends include a nurse and a high school counselor she’s known since elementary school. Kunis learned about baseball “through osmosis”: Culkin is a sports fanatic with an ESPN habit. “SportsCenter catches me up,” she says, “and PTI [Pardon the Interruption] and Around the Horn.”

Kunis is one of those people who’s just plain fun to be around, and her characters exude that magnetism even, as in the case of her new film, Extract, when she’s a bad egg. Starring opposite Jason Bateman, the owner of a food-flavoring plant, she plays Cindy, a young woman of obvious sex appeal and dangerous charm. “Wow, did you invent vanilla extract?!” she asks a smitten Bateman during a slam-dunk job interview. “Like, with your brain?” Cindy’s the lively spindle around which the movie, which also features Ben Affleck as a long-haired, pot-cured, bad-advice-dispensing bartender, revolves.

Kunis was in Toronto shooting the thriller Max Payne with Mark Wahlberg—a gig involving a fiercely cold winter, five-inch stilettos, and a gun roughly half her height—when director Mike Judge sent her the Extract script. Even if she hadn’t been a fan of Beavis and Butt-Head, which Judge created, and Office Space, his beloved cult movie about a dyspeptic band of computer programmers, Kunis would have been happy for an excuse to escape for a table reading. “I was like a little kid in a candy shop,” she says of bouncing around lines with Affleck and Bateman. “It was one of those experiences where I could stand back and go, you know, I’m OK.”

In 1991, when she was seven, Kunis emigrated from Chernovtsy, Ukraine, to the United States with her parents, grandparents, and brother. “It was a lottery system,” she says. “It took about five years. If you got chosen the first time around, you went to Moscow, where there was another lottery, and you maybe got chosen again. Then you could come to the States.” On her second day in Los Angeles she enrolled at Rosewood Elementary School not knowing a word of English. The next year, by third grade, she was fluent. (She credits the slow-speaking Bob Barker on The Price Is Right as an influential at-home tutor.) “I blocked out second grade,” she says. “I don’t remember, but my mom tells me that I came home and cried every day. I wasn’t that traumatized. It was just a shock.”

With her classic white Adidas (a style she’s worn since high school) planted on the back of the Reds’ dugout, her hot dog neatly dispatched and a cinnamon pretzel in her clutches, Kunis seems as American as it gets. Between intervals of whoops and claps to cheer on her home team, she recaps the life of a newly arrived immigrant family: Her father, a mechanical engineer by training, drove a cab; her mother took a cashier job at a Rite Aid. “All so we could have a better life,” Kunis says. “We shopped at Payless on a good day, Ross on a holiday. In junior high all I wanted was a Tommy Hilfiger shirt. We couldn’t afford it. But my mother found a man’s Tommy Hilfiger shirt on a back rack at Ross. She bought it for $1.99, took out the tag, and sewed it into one of my T-shirts. So when I went to gym class, I had my Tommy Hilfiger shirt.”

Her parents parked Kunis in acting classes to keep her busy after school. She won small roles as a result and in ninth grade landed the pilot for That ’70s Show. She’s worked consistently since, and in the past few years the wattage of her costars has intensified. She recently wrapped The Book of Eli opposite Denzel Washington and Gary Oldman, plays a stripper in Date Night with James Franco, and two hours before game time Darren Aronofsky, who directed Mickey Rourke to a prizewinning comeback in The Wrestler, cast her as a ballerina opposite Natalie Portman in Black Swan. But Kunis, who lives a few blocks from her parents (the farthest apart they’ve ever resided) and cites her mother’s kitchen as her favorite restaurant, makes no assumptions about the future. “I can be working today, and tomorrow you’ll never hear of me again,” she says. “This is an awful business.”

By the seventh-inning stretch, the Dodgers have 12 runs, the Reds only 1. Manny Ramirez, hit by a fastball while at bat, has been taken to Huntington Hospital for X rays. (No harm done—he’ll hit a three-run homer the next night.) Kunis has shown me where the pitch speed is flashed and explained that, no, there were not two runners on first; one was a base coach. “There are coaches at first and third,” she says without a trace of condescension, although even Stewie, the effete baby on Family Guy, or for that matter Brian the dog, would know this. Not long after belting “Take Me Out to the Ball Game” with the 48,000-strong crowd (never leave a game before “Take Me Out to the Ball Game,” Kunis says), we decide the Big Blue’s lead is irreversible, and it’s safe to call it a night. As we file out, one of the Reds looks up and sees Kunis. Her Dodger regalia notwithstanding, he rolls her a ball over the dugout roof.