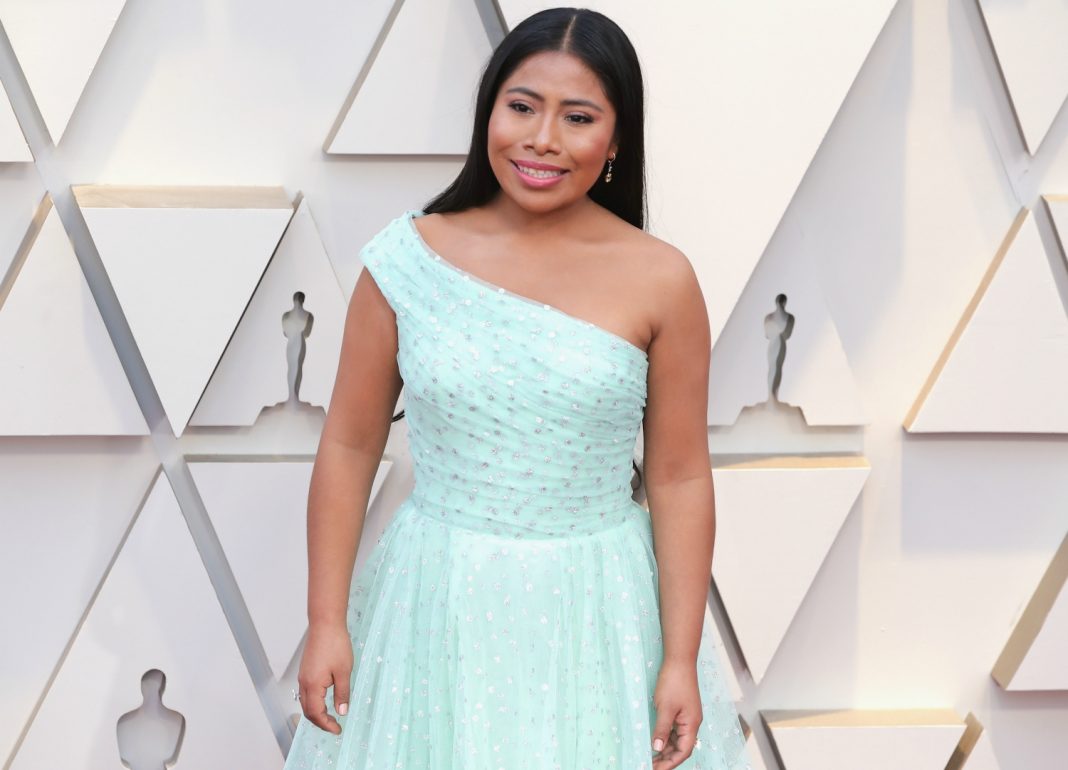 Yalitza Aparicio is the first indigenous woman to be nominated for an Academy Award for Best Actress for her work in Alfonso Cuarón’s Roma, and despite not taking home the Oscar –Olivia Colman won for her role in The Favourite–the Oaxacan actress of Mixtec and Triqui heritage has paved the way for future generations.

Her nomination has made many from the Latinx community proud, but her successes have also exposed deeply rooted bigotry and racism. A group of Mexican actresses lobbied to exclude Aparicio from Mexico’s Ariel Awards (Mexico’s equivalent to the Oscars); telenovela actor Sergio Goyri was filmed saying that Aparicio was undeserving of the Oscar nomination and insulting the actress based on her indigenous roots; and social media comments were made about her background and her talents.

“Because of this history, indigenous women have often been perceived as threats or out of place in urban settings and other public spaces, and this extends now to fashion magazine covers and the red carpet, especially if they do not conform to Western and Eurocentric ideas of beauty. It’s no wonder Aparicio’s presence causes discomfort to those who understand themselves according to ideas about who was allowed in which spaces and in what capacities,” writes Jorge Cotte for REMEZCLA about Aparicio’s success revealing Mexico’s anti-indigenous bigotry.

Despite the anti-indigenous comments made of Aparicio’s nomination for Best Actress, there’s also been an overwhelming outpouring of admiration for the 25-year-old actress. In L.A., for one, there’s been no shortage of gushing over Aparicio and what her nomination represents for the indigenous community in Mexico and beyond.

And it’s no surprise that artists in L.A. would be channeling their happiness and pride for Aparicio’s success into their art. We spoke to a couple of artists about what Aparicio’s nomination means to them and their communities.

“Yalitza’s nomination represents hope to people of color but especially to the Latinx and indigenous community. Along with her nomination, Yalitza brings representation to Hollywood. Despite all the negativity in our nation, Yalitza proves that there is room for everybody in Hollywood. We are living in an age where our commander in chief constantly degrades Latinos. Many of us know someone or have experienced racism ourselves.

My constant frustration becomes an inspiration and I channel that through my work. I become more proud of my heritage every day and Yalitza represents me and where my family comes from. In my illustration, I gave Yalitza a yellow dress to represent the sun and hope. Her jewelry was inspired by Frida Khalo and in the background I drew an agave plant, to represent her home, Oaxaca.”

“Yalitza’s nomination is a huge deal and very deserving! Yalitza represents so much for so many of us and she is making history. Her nomination has also sparked very racist and classist comments in many of the magazines that she has appeared. While it sadly didn’t surprise me to see the comments, I am happy to see that she is continuing to shine and do her thing! Out of all the magazine covers that she has been part of, I was immediately taken aback by the Bad Hombre Magazine cover. I knew I had to pay homage to her by recreating the cover. Whatever the outcome of tonight’s awards show, Yalitza is already winning and many people are seeing themselves in her. I cannot wait what the future holds for her.”

“Yalitza Aparicio’s Oscar nomination is a big step for us brown girls in film. Spanish language media often pokes fun at indigenous people with characters such as la India Maria, but on Oscar night, Aparicio is making history. I mostly draw myself, and Aparicio shares so many features I’ve seen in myself, mi abuela, my family and my ancestors. I occasionally draw figures in pop culture that mean a lot to me such as Juan Gabriel, so of course, I was going to draw Aparicio. This illustration is my way of commemorating this moment that will go down in Hollywood history.”

“Viva Yalitza! Everyone, please share in support of her winning the Oscar on Sunday. If she wins she will be the first Indigenous Woman to win this award, not that she isn’t already amazingly talented but I feel it is important that young native sisters get to share the glory of such an accomplishment. #IndigenousPower,” wrote Montejano in a caption sharing his piece.

“I wanted to honor and celebrate the historic Oscar nomination of Yalitza Aparicio, but mostly I wanted to push back against the bigotry aimed at her by some in Mexico. In the image, I honor Yalitza’s indigenous heritage by depicting her as a Mixteco Oscar statuette styling a Mixtec huipil and geometric designs from Mixteco architecture.”