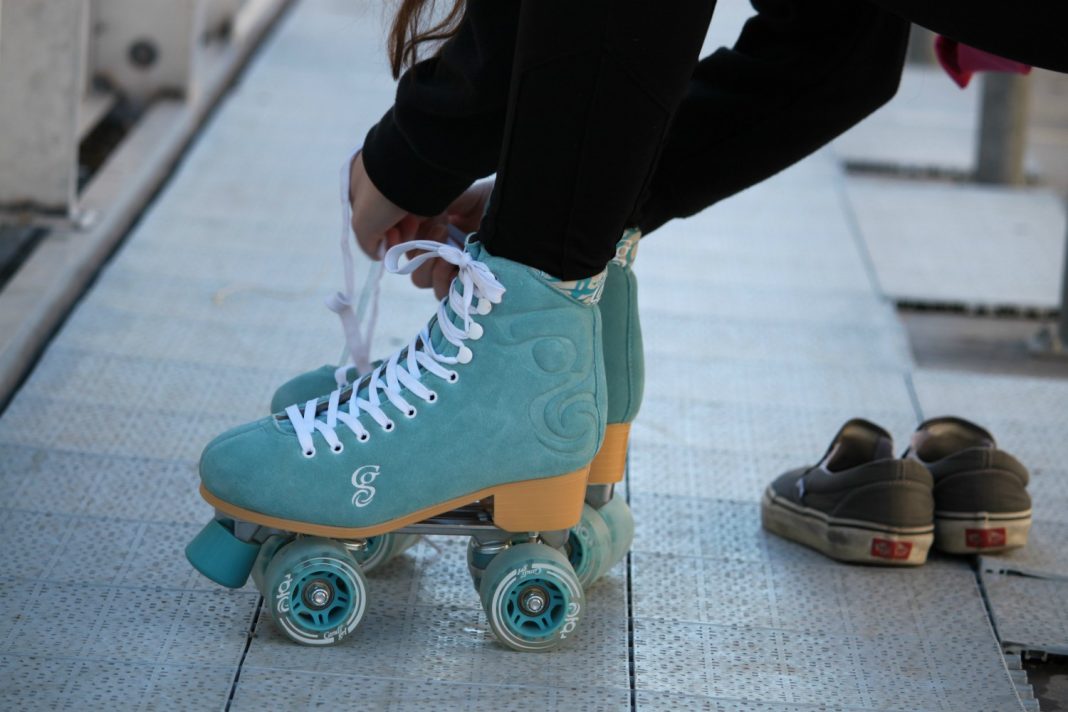 In a TikTok video with millions of views, influencer Kels McGriff glides backwards down a palm-tree-lined street in L.A. on a pair of yellow roller skates. “Dreams” by Fleetwood Mac is playing, and in her bell-bottom jeans and crochet fringe top, McGriff looks like she’s straight from another era.

Roller skating videos like McGriff’s have exploded online in the past few months. Desperate for quarantine-friendly activities and inspired by the breezy, feel-good aesthetic evoked in the videos of popular creators, more and more people are picking up roller skating as their new summer hobby. Retailers around the world report selling out of skates left and right.

But while a spate of viral videos on TikTok and Instagram have been credited with sparking the recent surge in interest, many skaters stress that this is not a roller-skating “revival” or “comeback.” In reality, skating never really went away—it’s been an integral part of the Black community for decades.

Los Angeles is home to a long, rich history of Black skate culture, as chronicled in the 2017 documentary Roller Dreams. As segregation kept Black skaters out of L.A.’s indoor rinks, Venice Beach became a place where the Black skate community could thrive. In the 1970s, Venice became ground zero for the roller dance style of skating that became a global phenomenon, and when the skate scene took off, police tried to suppress Black roller dancers by implementing laws that banned loud music.

“Knowing the history of dance forms how you approach your movement, and that informs how you approach skating as well,” says Keon Saghari, 30, who started skating while transitioning out of her professional dance career. “From one skater to another, know your roots because it enriches you. It helps form you and shape what you do.

But on TikTok, these roots are not always apparent. Given skating’s fraught racial history, the uncritical 1970s nostalgia that abounds on the app can feel callow, especially given that TikTok has been accused of suppressing Black creators. Many of the highest-performing roller skating videos on the platform feature white and white-passing women.

“Black people are being overlooked in a lot of cases,” says Lily Ruiz, 22, who first learned how to skate from her father. “In L.A. especially, there are people who have been skating since they were children, and…it’s questionable when you have someone who just started skating not too long ago receive a lot of popularity on social media platforms.”

Additionally, while some describe L.A.’s skate community as welcoming and inclusive, others cite experiences of discrimination and a lack of diversity. “There were moments where you don’t feel very included, because you look around and everyone’s…partnering with a white girl, and no one’s really asking you to skate with them,” says Kelsey Guy, 28. “Those little moments kind of make you feel left out.”

Fellow skater Kamry James, 25, says she’s felt alienated at local rinks, including Moonlight Rollerway in Glendale, where the mini and fiberglass wheels that are popular in Black skating styles are banned. Even as a regular going to Moonlight three times a week for eight months, Guy says she’d still sometimes be asked to show her wheels, while she noticed others could enter the rink unbothered.

“Honestly, I didn’t feel very included going there,” says James, 25. “There weren’t a ton of Black and brown people, and the music they played made it feel like they didn’t want that type of people coming there.”

James recently partnered with Guy and Ruiz to launch Sista Skaters, skate classes taught exclusively by Black women. Through the classes, she hopes to foster diversity in the skate community and raise money to donate to Black Lives Matter L.A.

“I want it to be a community space for all women, but specifically Black, Indigenous, and People of Color, because there’s not a huge representation of that here in the Los Angeles area,” James says. “I want us to build each other up within our own community, so we can make money as a community and give that back.”

Ruiz has also embarked on a project called Casting Black Skaters, which connects Black skate talent with opportunities in the entertainment and media industry. In the month and a half it’s existed, the Instagram account has received submissions from talent across the country and the United Kingdom.

Is the current TikTok skate frenzy just a fad? Maybe, but it doesn’t seem to be dying down any time soon.

“Skating has always been incredible, and it maybe just hasn’t had a light shining on it as strongly as it is now,” says Saghari. “Maybe a new style of skating will come out from all of this, and that’s going to be a part of the history of skating, and in the future we would want people to know this history. I think that goes beyond skating, with anything you do, know what you’re doing and why you’re doing it.”

Dylan Mulvaney On Transitioning and Becoming a TikTok ‘Trailblazer’