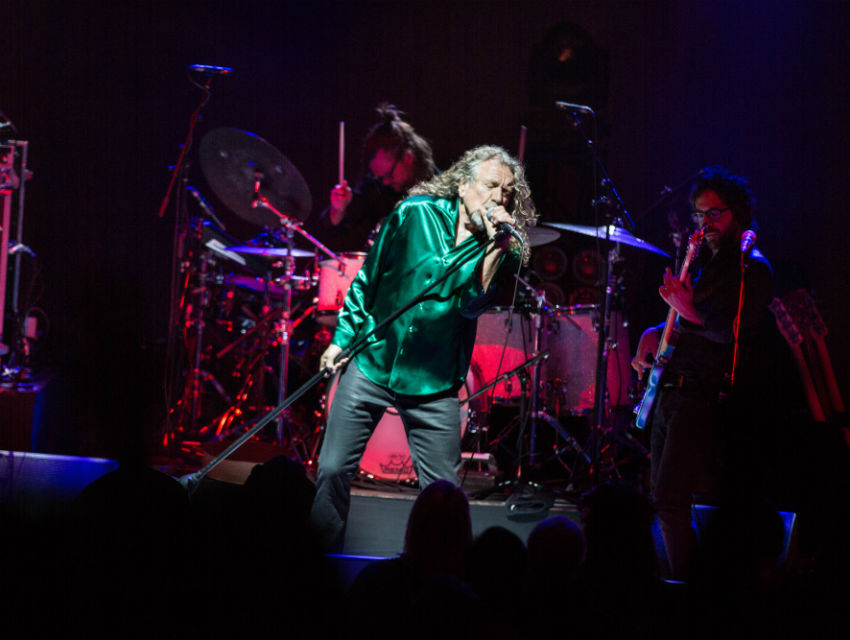 “We’re Robert Plant and the Sensational Space Shifters,” he said. “Expect no less.”

One of rock’s most iconic figures hit the Greek Theatre this week, and he brought with him a set that most certainly will stoke the fire of Led Zeppelin reunion hopefuls. From the show opener “The Wanton Song” off Zeppelin’s Physical Graffiti to the finale of “Rock and Roll” off Led Zeppelin IV, Plant brought nuance and imagination to a set more than half-filled with Zeppelin gems. Though tempered, his voice still soars, its classic, honey-dipped tone untouched by age, through reworked arrangements of beloved songs.

The Sensational Space Shifters is arguably Plant’s most Zeppelin-esque project of recent years. After his massively successful Americana/bluegrass collaboration with Alison Krauss on Raising Sand, Plant has shifted gears and cobbled together this rambunctious group of rock ‘n’ rollers. Together, they tackle Zeppelin tracks, Howlin’ Wolf covers, African beats, psychedelic tones, gypsy jangle, and something resembling Plant’s version of an electronic track.

With Plant as the alchemist, their onstage chemistry explodes. The minimalist stage production is a testament to their inimitable presence. Clad in a green silk button-down and still sporting his golden mane of curls, Plant jives around the stage and swings the mic stand as he wails, his charisma unchanged, never looking like a caricature of his younger self. His musings on his storied history peppered the set with perspective and humor.

“Aspiring to be a musician in the early ’60s was a mean task,” Plant said to the crowd. “Who would have ever thought—as we looked across the Atlantic and kept buying these great records, made out here in L.A. and New York, Chicago, Memphis and stuff—who would have ever thought that we’d get off the plane in 1968 and kick ass for so many years?” he continued, referring to his love of American artists and the meteoric rise of Led Zeppelin.

“And with those musicians came a lot of people who were really important to us. I dedicate this song to a very good friend of mine who, at the demise of Led Zeppelin, went and teamed up with some Irish kids who’ve been playing six nights at the Forum. I’d like to dedicate this song to one of the troopers who came with us back then and who left us this time last week: Dennis Sheehan. This is a song for Dennis,” he said before launching into a shimmering version of Zeppelin’s “Going to California.”

Just as in projects past, Plant elegantly blends classic fare with newer material or reimagined covers. “Spoonful” turned into “The Lemon Song,” one of Zeppelin’s most bluesy and rarely performed tracks from Led Zeppelin II. “I had kind of forgotten about it for 40 years,” Plant confessed. Ironically, it was in 1999 that Zeppelin guitarist Jimmy Page recorded a live version of the track with the Black Crowes at the Greek Theatre on the record Live at the Greek.

When “No Place to Go” resolved into the swirling bass line of “Dazed and Confused” the crowd’s elation was palpable. Plant would perform two more Zeppelin tracks before “Whole Lotta Love” would close the main set with aplomb. He would return for an encore that featured one of his best known work “Rock and Roll” off the seminal Led Zeppelin IV.

Perhaps it was fitting for rock’s Golden God to play at the Greek. It’s been nearly half a century since Zeppelin first came to Los Angeles, but Tuesday night proved Plant has what it takes to conquer our Western shores again.