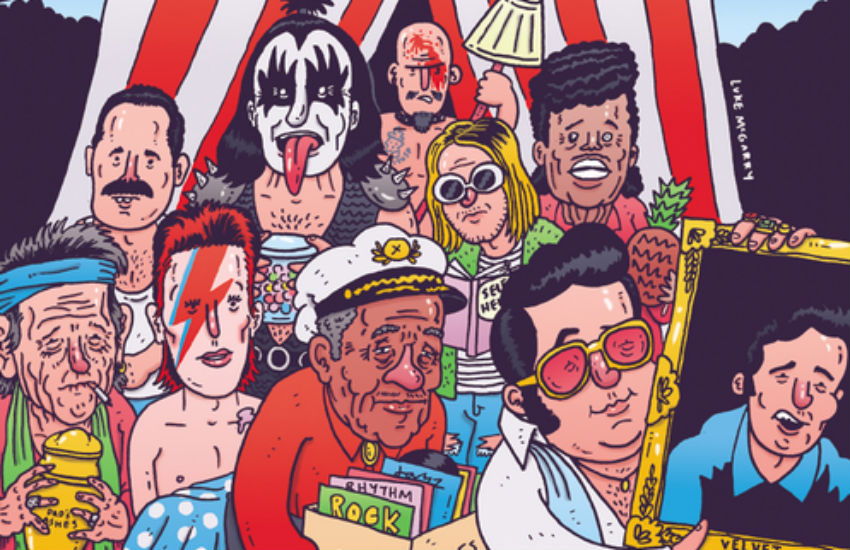 With vinyl vendors, vintage guitars and continuous cocktails, the Rock ‘N’ Roll Flea Market gives Los Angeles a hangover cure featuring both the “hair of the dog” and shopping. Jamming from 10 a.m. to 3 p.m. on the first Sunday of every month at The Regent Theater downtown, the RNR Flea Market can kickstart a Sunday with the same raucous fun that closed out Saturday night. The $2 cover charge is waived for those who eat at Prufrock before shopping, which is a lovely pizzeria attached to the venue, offering a simple brunch with a complete selection of cocktails.

Having a few drinks at the market is encouraged by RNR Flea Market creators Michael William Andrews and Paul Svendsen, who also own the gift and design shop Inheritance. As Svendsen boasts of the flea’s patrons, “They have brunch at Prufrock in the morning. Then they have bloody marys and mimosas all day long at the flea market; they can walk around with their drinks while they shop.”

“Even though Rock ‘N’ Roll is a very vague term, it gives the vendors a focus to go towards,” Andrews explains. “I feel like in L.A. you have to sell yourself in a certain way, because if people are going to drive out from Santa Monica, they have to know what they are going for.” Andrews and Svendsen are quick to point out that this flea market is aimed at a particular crowd that knows what they are looking for.

The RNR Flea Market is not supposed to be a place where you can find everything under the sun. It is smaller than the massive outdoor venues, like the Rose Bowl, and in contrast it offers shoppers a fun social experience while they browse. Andrews says, “We’re not really comparative to those flea markets, because we are kind of like a party that just happens to sell stuff.” With almost 50 vendors, half of which are dedicated to vinyl, there are plenty of vintage instruments, music and memorabilia to purchase. Andrews and Svendsen are also always looking for new vendors to rotate in, interested parties can contact them through the RNR Flea Market website. The Regent Theater has its own rocking history that goes back over a century. After opening in 1914 as The National, the theater was renamed The Regent in 1917. Throughout the 20th Century the theater served as a vaudeville house, movie theater, grindhouse and porn venue before it was left vacant during the 90’s and then recently acquired by Mitchell Frank, owner of concert promotions company Spaceland Productions. Frank renovated The Regent Theater, with interior design by Svendsen and Andrews, and the 1,100-person capacity music venue re-opened in November of last year. Andrews and Svendsen are excited to help bring ‘rock ‘n’ roll’ culture back to downtown in this iconic venue.

Join them for a drink at the RNR Flea Market, or visit the second location of their store, Inheritance, which is set to open a few blocks from The Regent on Traction Avenue in April.

Dancing in the Streets: The Concern Foundation Block Party