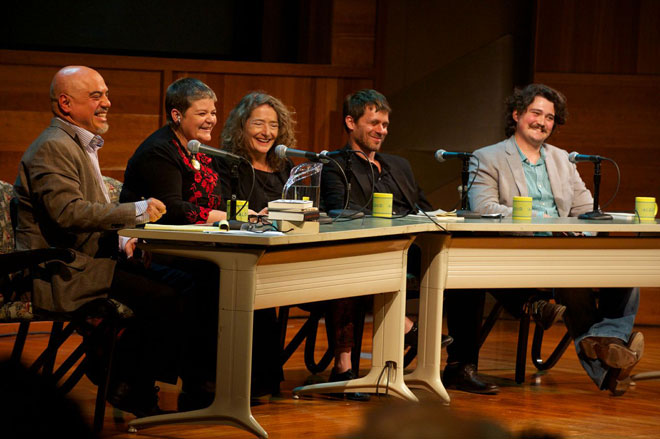 In the long line for last night’s sold-out ALOUD conversation “The Making of the Great Bolaño: The Man and the Myth,” you could see at least one small sign of a revolution as nearly everyone was paging through a little red book—not Mao’s but Bolaño’s. The library was handing out a 16-page scarlet pamphlet with the author’s last interview, which was conducted by Mónica Maristain for Spanish Playboy. Ten years after his passing at age 50, Roberto Bolaño, the writer best known for his novels The Savage Detectives and 2666, was celebrated and discussed at length on a panel moderated by Los Angeles Times staff writer Hector Tobar featuring Bolaño biographer Mónica Maristain, New Directions publisher and president Barbara Epler, critic and novelist Ben Ehrenreich, and poet and translator David Shook.

Co-presented with LéaLA – Feria del Libro en Español de Los Angeles, the event was the very first at the Central Library to feature simultaneous bilingual translation in Spanish and English, which was provided by Antena through small devices available on your way to your seat. The evening commenced with an invocation of the author as Tobar and Shook read from Bolaño’s 1976 “Infrarealist Manifesto.” Tobar read passages in Spanish and then Shook, who dubbed himself the “least important and most devastatingly handsome translator of Bolaño,” read his own translation of the then 23-year-old’s wide-ranging poetic proclamation. Later, Shook also read a three-line Bolaño poem namechecking a familiar city in which the speaker tells us he “dreamt of frozen detectives in the great/refrigerator of Los Angeles.”

After joking about the potential dangers of summoning up the author, Maristain spoke with specificity and sensitivity about Bolaño’s enormous generosity and imagination. She responded to the totemic and hagiographic ways he would later be received and understood by saying, “We need to take the Bolaño out of Bolaño.” Epler recalled how New Directions came to publish Bolaño on the recommendation of writer Francisco Goldman and to introduce his work to American readers through titles that stretch from By Night in Chile and Distant Star to the 2011 essay collection Between Parentheses and the soon-to-be-released volume of collected poems, The Unknown University.

Admitting he was being something of a gadfly, Ehrenreich asked the panel and the audience to consider why and how it was that Bolaño had ascended to such empyrean literary heights so quickly in the U.S. and what other Latin American writers might be neglected because of his success. Epler was quick to point out that Bolaño was a staunch advocate for many other writers and a “machine for endorsing his friends—and some of his ‘friends’ had been dead since the 14th century.” Each speaker took turns praising the writer’s lyricism, wit, and vertiginous transformation of stark reality and the ways his work drove straight to the heart of questions about revolutionary struggle, mortality, bravery, and evil. For all the talk of the myths and realities of Bolano’s life, it was his work that cast the most powerful and enduring spell throughout the night.