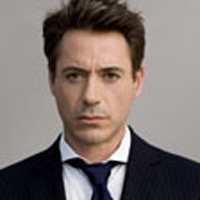 Jodie Foster set the tone of the 25th Annual American Cinematheque Award show by honoring pal Robert Downey Jr.’s life thus: “Luckily, it didn’t end in the morgue.” In fact, 12 years ago I sat in that same ballroom while Downey called Foster from prison to wish her well as she received her Cinematheque Award. “I think of you a lot, lately,” he said back then over the sounds of other inmates behind him, “especially in the shower.” (I ran that quote in the mag’s Jan. 2000 issue). Friday night’s dinner was as wild and heartfelt as Downey’s life and career has been, with his pregnant wife Susan and father Robert Downey, Sr. speaking and showing clips of him when he was a tot. Famous folks like Sean Penn, Guy Ritchie, Jennifer Aniston (with Justin Theroux, who co-wrote Tropic Thunder) and Mel Gibson showed up to lend their support. In turn, Downey lent Gibson some support of his own while accepting the award. Check out the video:

The dinner was not televised, which allowed people to speak a little more freely, I think, but who knows. With a cat like Downey, I think Joel Silver might have told a story of young Robert taking a bathroom break in a castmate’s trailer—and not in the restroom—anyway. Downey’s work was praised along with his positive life path. As Michael Douglas said, “Your performance in Chaplin was one of the most powerful performances. I love seeing how things have changed for you in such a fine, fine way. I’m so happy you found some peace of mind.” I think a lot of folks were thinking the same thing. Downey left ‘em laughing. He pointed out that his shrink was sitting at his table but wanted to remain anonymous, which lead Garry Shandling to poke some fun at himself: