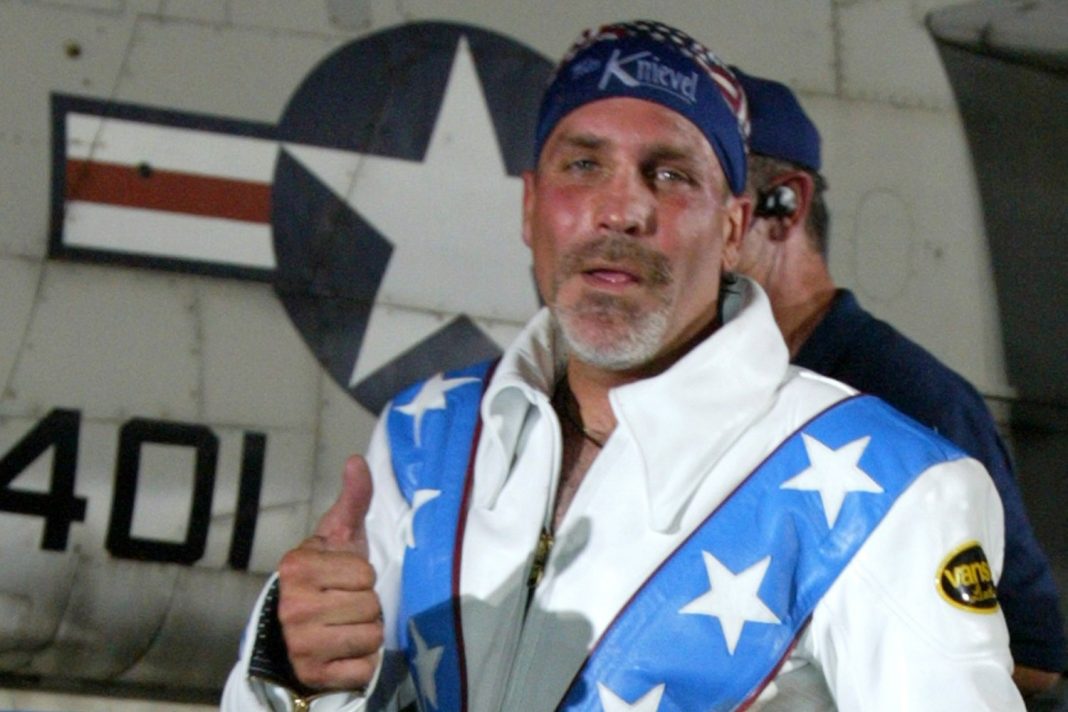 Robbie Knievel, who followed in the mighty airborne footsteps of his father, Evel Knievel, has died of pancreatic cancer, TMZ reports. He was 60.

“It was expected,” Knievel’s brother Kelly told CBS News. “He was in Reno with his three daughters by his side.”

Knievel, known as “Kaptain Robbie Knievel,” led an impressive career of over 350 treacherous and at times bone shattering stunts. His last jump took place in Coachella in 2011. Ten cars and two massive tractor-trailers stood end to end, with ramps on either side. Revving his motorcycle, Knievel quickly moved through its gears, accelerating towards the line of vehicles.

Within a split second—as quickly as it takes to comprehend the larger-than-life daredevil soaring across the sky—he landed on the other side bringing an end to his career. Coachella, although jaw dropping, was by no means the longest, highest, or wildest stunt for a man whose accomplishments include clearing the Grand Canyon and flying length-wise over a moving steam train.

Home in Nevada, Knievel made his mark on Sin City, where some of his greatest achievements took place.

Along the strip, Knievel cleared the gap between the 16-story Jockey Club Towers and soared 231 feet over a line of limousines at the Tropicana Hotel. But arguably his most memorable performance was when he flew over the fountains of Caesar’s Palace, the Times reported, accomplishing what his father hadn’t been able to years prior.

Knievel also jumped over 18 corvettes in Texas, 24 cars in Estes Park, and a row of 24 cargo trucks in Ohio. His injuries included “two knee surgeries, eight broken bones, torn ligaments, three compressed vertebrae, concussions… and they had to put me to sleep to get the pavement out of my ass a couple times,” he told the Green Bay Press-Gazette in 1998.

Born on May 7, 1962 in Butte, Montana, to Evel Knievel and his wife Linda, from a young age Knievel aspired to be like his father, performing with him for his first time at Madison Square Garden when he was just eight-years-old.