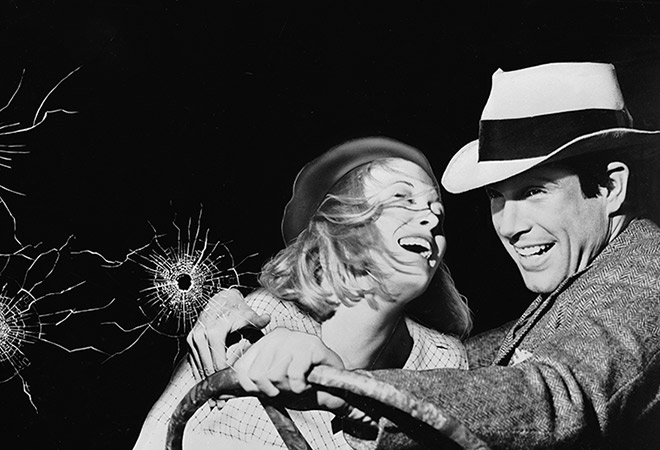 We love road trips. Not just taking them—which we do in our March issue with ten custom-built routes from the California coast and Baja wine country to Zion National Park and the Desert Hills Premium Outlets—but also watching them onscreen.

This week marks the final film in our road trip movies series, and we have to say, we’re going out with a bang: Get ready for a screening of Bonnie and Clyde, presented at ArcLight Cinemas in Hollywood on March 25.

The classic 1967 film stars Warren Beatty and Faye Dunaway as the real-life outlaw couple Bonnie Parker and Clyde Barrow, who went on a crime spree at the height of the Depression era. The story of Bonnie and Clyde has become the stuff of lore, spawning more than a few retellings across multiple cultural platforms, not the least of which being musical reinterpretations. (For our part, we staged a B&C-themed fashion shoot starring James Wolk and Amanda Setton.) To get you in the marauding mood for tomorrow’s showing, we thought we’d explore five songs inspired by the criminals’ tale. Check them out below:

Little known fact: Bonnie Parker was a poet. This song, written in French and released on the heels of the Beatty/Dunaway film, was based on her poem titled “The Trail’s End.” (How’s this for spooky: Parker wrote the poem only a few weeks before she and Clyde were shot and killed.) Belinda Carlyle covered the below version on her own French album titled Voila.

2. The Legend of Bonnie and Clyde
Merle Haggard
1968

Like Gainsbourg and Bardot, Haggard took advantage of the fugitive fever induced by the film and released this title track off a record of the same name. Funnily enough, it was co-written by one Bonnie Owens.

Keep the following in mind for the rest of this article: Yo-Yo and Ice Cube were the first rappers to hip-hopify the story of Bonnie and Clyde. This was the third duet  between the female rapper and Ice Cube, which they would follow up with “Bonnie and Clyde II” in 1996.

The west coast rapper recorded this song—which uses the story of Bonnie and Clyde as a metaphor to describe the rapper’s relationship with his gun—for what would be his final album (The Don Killuminati: The 7 Day Theory).

Saving the best for last. Music’s royal couple channeled Bonnie and Clyde in the video for this song, which samples Shakur’s Me and My Girlfriend and was inspired by the 1967 film. It went on to become Jay-Z’s second top ten single and Beyonce’s first as a solo artist. Ah, young love.