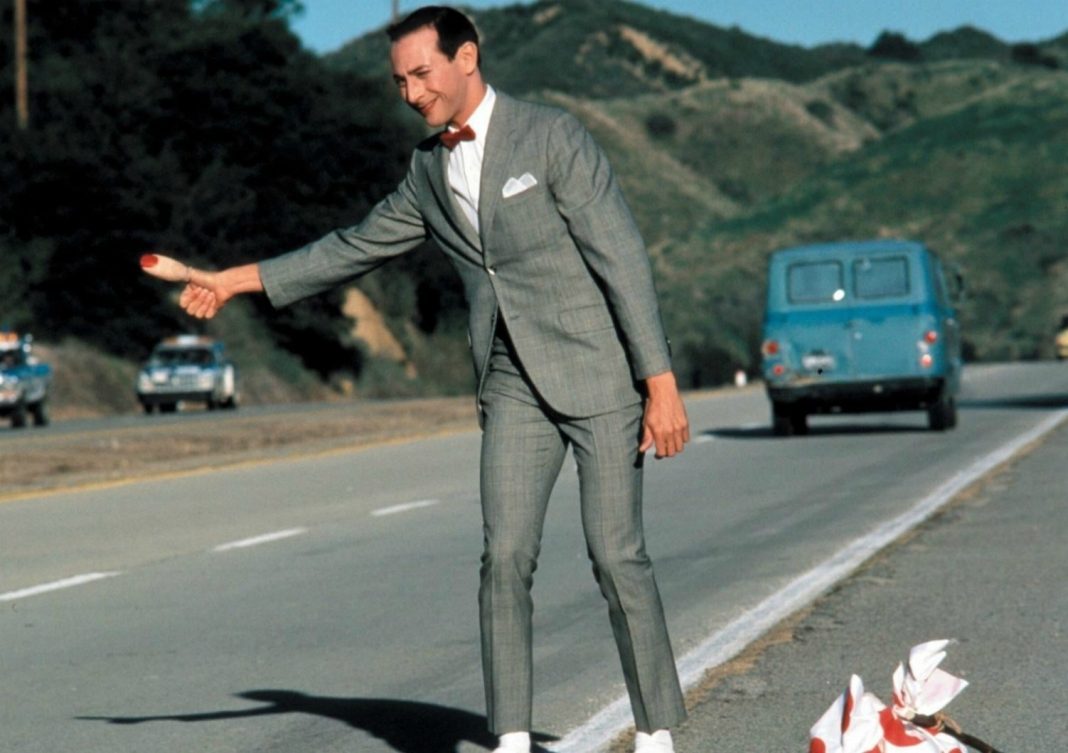 Pee-wee’s Big Adventure is one of the best road trip movies of all time, but most of it was filmed within an hour of L.A.

If you’ve not seen the film, it follows its protagonist (a forlorn Pee Wee Herman) as he sets off on a journey to recover his beloved bicycle that turns into an epic adventure full of rodeos, psycho boyfriends, dinosaurs, scary bikers, and scarier clowns. And Tim Burton didn’t have to go far to bring his kaleidoscopic vision to life.

Go search out these iconic sites after you’ve seen the movie and plan your own adventure.

There’s no basement at the Alamo nor at the Mission San Fernando where most of the film’s scenes set at the Texas fort were shot. The adobe (“a-dohhh-bee”) church is over 200 years old, and the kitchen tableau seen in the film is still open for tours. Mission Hills.

The bar where Pee-wee does almost gets pummeled by a bunch of bikers and then does his famous “Tequila” dance is now a Mexican restaurant and market located in Santa Clarita. You won’t find a line of motorcycles outside today, but mind your step all the same. Santa Clarita.

The art deco tower of the long-closed airport doubles as a Texas bus station where Pee-wee is chased by Simone’s former boyfriend Andy. The site has since been completely redone, and the project earned a Los Angeles Conservancy Preservation Award in 2017.

Pee-wee avoids Andy at the bus station, but he reappears with the bulls at the rodeo. This scene was filmed at Fairplex in Pomona, home of the Los Angeles County Fair every fall (er, when there isn’t a global pandemic). The rest of the year, the fairgrounds hosts art shows, hot rod cruise-ins, and even immigration ceremonies for new citizens. Pomona.

Perhaps the most iconic location from the film, the Cabazon Dinosaurs are where Pee-wee and Simone watch the sunrise, before being rudely interrupted by Andy. It’s still a must-stop attraction on any drive to Palm Springs.

The 600-acre parkland once owned by razor mogul King Gillette and featuring a mansion designed by Wallace Neff played host to the Tour de France in a dream sequence that opens the film. These days, hiking, bird-watching, and Chumash educational walks are offered at the ranch. Calabasas.

The Warner Bros. studio is one of the most historic in Southern California. The legendary lot in Burbank was built in 1926 and continues to be a hub of the movie industry. The company usually offers a VIP tour that visits functioning sound stages, drops in on working craftsmen, and cruises through New York Street (home of fortuneteller Madame Ruby in the film) and other neighborhoods seen in the movie. Burbank.