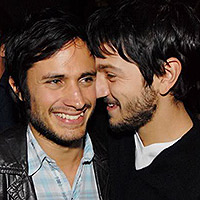 We love road trips. Not just taking them—which we do in our March issue with ten custom-built routes from the California coast and Baja wine country to Zion National Park and the Desert Hills Premium Outlets—but also watching them onscreen.

This week’s road trip movie, presented at ArcLight Cinemas in Hollywood on March 18, is the Spanish-language tour de force Y Tu Mama También directed by none other than this year’s Oscar winner for best director, Alfonso Cuarón (Gravity, A Little Princess, Harry Potter and the Prizoner of Azkaban).

The film, which stars Diego Luna and Gael García Bernal as two rich teenagers abandoned by their girlfriends for the summer, is a coming-of-age story set against the political and social turmoil that characterized Mexico in 1999. With their paramours gone, the boys find themselves bored; upon meeting an older woman named Luisa (Maribel Verdú) at a wedding, they try to impress her by telling stories of a fictional beach called Boca de Cielo (Heaven’s Mouth). They share their plan to visit the beach and invite her along; initially she declines, but after finding out her husband has been cheating on her, she reconsiders. The three embark on a road trip that is an examination of sexuality as well as the economic issues plaguing the poorer, rural areas of Mexico.

The arc of Luna and Bernal’s characters is a devastating one: best friends who fall for the same woman and who are ultimately torn apart by their own affection for each other. In real life, however, the actors’ relationship couldn’t be more adorable. Not only do the two love working together, but they make for one of the film industry’s most precious bromances. To get you prepared for tomorrow’s screening, check out 11 photos below where the bosom buds were snapped doing what they do best: getting their BFF on.

3. The Luna/Bernal version of Allie and Noah’s Notebook hug

5. Luna’s ‘stache is questionable. The pair’s bond (and choice in award show fashion) is not

6. How can these two get anything done when they’re always staring lovingly at each other? Deserving of applause, indeed

8. Red carpet BFF giggles are the best kind of giggles

10. The best friends who get their permanent resident green cards together stay together

These L.A. Artists Are Celebrating Roma‘s Yalitza Aparicio in a Beautiful Way