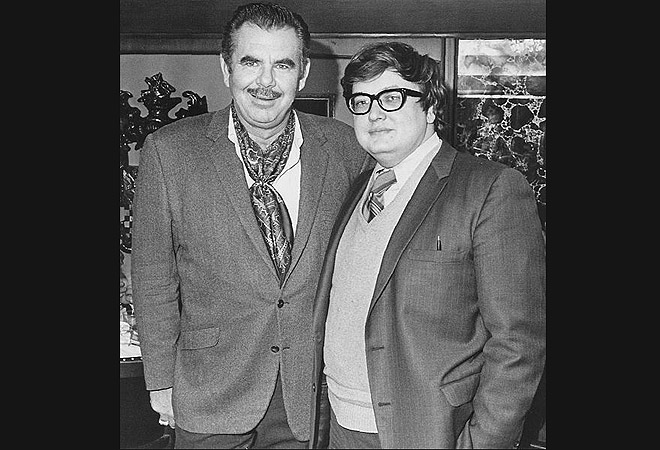 Roger Ebert, one of the great American film critics, has died. Growing up in Chicago, he was one of the first two film critics I ever encountered. I remember watching WTTW’s Sneak Previews and then At the Movies, where he and Gene Siskel, two guys who wrote for the two rival daily papers, sat in the balcony of an empty theater chatting about and sometimes vociferously arguing about the merits of the movies they’d seen that week. I wasn’t old enough to see most of the movies they were debating but I still recall many of their heated thumbs up/thumbs down skirmishes. That balcony on which the two movie fanatics clashed is long gone. Like Siskel. Like Ebert. Perhaps like the job of “movie critic” altogether.

I knew Ebert first as a TV personality but he was a fixture in Chicago print journalism. A reporter at the Chicago Daily News and then at the Chicago Sun-Times under the tutelage of the renowned Mike Royko, he was named the Sun-Times film critic in 1967. His was the first byline I recognized among all the famous journalists’ names pasted up behind the bar when I went in for a “cheeseborger” at that great newspaperman’s haunt made famous by Saturday Night Live the Billy Goat Tavern. Only later did I discover that Ebert had both won a Pulitzer Prize—the first film critic to win that award—and penned the screenplay for Russ Meyer’s Beyond the Valley of the Dolls. His tastes were broad and deep, thoughtful and genuine, bridging high and low without a hint of posturing. He left grad school at the University of Chicago to become a generous, trusted critic read by anyone who went to the movies. Above all, Ebert was an uber-fan, devoted to sharing the films he loved and what he found in them.

Although the word “film” is becoming an anachronism in a world saturated with digital media, Ebert was an avatar (though he probably wouldn’t like that word being outspoken against video games as an artform) of the last great generation of writers on cinema. Much has been said about how prolific he was after his operations for thyroid cancer in 2006, but he was as intellectually daring as he was physically brave. Ebert was one of only a few critics, perhaps the first, who made a point of reissuing reviews when he had changed his mind about a film. A cultural critic at the top of his game, he didn’t need to do it but publishing those reevaluations only made his point-of-view stronger and more nuanced.

To pay tribute to Ebert, go to rogerebert.com and search out his takes on your favorite and your least favorite films. I’m partial to his hilarious one-and-a-half-star pan of The Tuxedo and, more controversially, his against-the-critical-grain initial reaction to Blue Velvet. Take a look at his review of Dark City, which he named his favorite film of 1998. In addition to his film writing, he also wrote lovingly about his life in Chicago as in his wonderful tribute to the city’s vanished watering hole O’Rourke’s. Although he lost the ability to speak as a result of the cancer that necessitated the removal of his jaw, he remained a powerful voice for the love of cinema. His wit, intellect, and spirit will be missed.