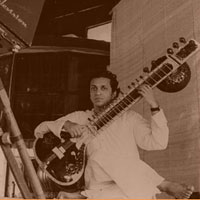 Perhaps Ravi Shankar and George Harrison have finally been reunited. The master sitar player passed away yesterday at age 92 from complications of heart valve surgery. He was surrounded by his wife Sukanya Rajan and his daughter Anoushka, reports CNN, at his home in Encinitas. Yes, the legendary Indian sitarist had been a Southern California resident for several years — at least when he wasn’t busy touring the world.

Shankar, who was born in Varanasi in the state of Uttar Pradesh, helped popularize Indian musc in the West, picking up famous students like Beatles guitarist Harrison (who passed away in 2001) along the way. His other daughter, Norah Jones, is also a succesful musician. Last month, we had a chance to speak to Shankar. He was recuperating from a two-month stint in the hospital but was warm, open, and excited to be playing a show at the Long Beach Terrace Theater — his first with Anoushka in five years:

“I always improvise and don’t think very much beforehand about what I’m going to play. I will be performing special ragas I have not performed before… There are thousands of ragas and we choose three or four of them — different talas, rhythm cycles. I love [improvising], it’s my specialty.”

It was Shankar’s last public performance. Click here for the full interview.

L.A. County Temporarily Lifts Limit on Cremations Because So Many People Are Dying