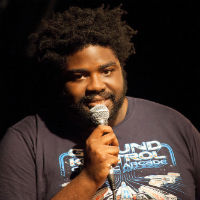 Back in 2012, a hugely successful Kickstarter campaign spearheaded by one-woman comedy army Abbey Londer made L.A.’s first alternative comedy festival Riot LA a reality. This weekend, the underground event returns with a lineup that aims to leave you ROFLing. Forget hurtling yourself all over town; Riot LA is taking over a swath of downtown between 2nd and 3rd streets and Main Street and Harlem Place Alley, occupying venues like the Downtown Independent theater and gritty punk club the Smell. Last year’s inaugural run featured a stellar line up of jokesters and this year promises to up the ante with names like Doug Benson, Kristen Schaal, and Todd Barry. If you can’t make it to all four days of the festival, here are three must-see acts at Riot LA.

The Cuddler: Ron Funchies
Southern California’s own Ron Funches has a uniquely lovable deadpan delivery. “I have a cousin who’s very sensitive about racism, he called me recently because he was quite upset. He went to a tuba recital where he was only one of three black tuba players,” Funches said during a recent set at the Laugh Factory. “But three black tuba players is a lot of black tuba players.” According to Funches, audience members should expect jokes that sound the way fresh chocolate chip cookies taste.
When: 9 p.m., Saturday, Jan. 11 at The Smell. He’ll perform with Sean Patton, Emily Heller, and Richard Bain.

The Midwesterner: Kyle Kinane
Kyle Kinane recently found himself in a Twitter war with Pace Foods over their salsa advertising strategy that, according to the comedian, contained homophobic language. A transplant from Addison, Illinois. Kinane started tweeting his critique of the campaign at Pace Foods’ Twitter account, which promptly re-tweeted his missives without question. This left Kinane with no other choice than to test the boundaries of the corporation’s social media strategy, tweeting “@Pace_Foods only eats Tostitos salsa at the company Xmas party” and “I was never part of the 99% movement, but this morning we shut down big salsa! Cheers!” The whole thing turned out to be a hoax perpetrated by fellow L.A. comedian Randy Liedtke, but it is nevertheless one of the funniest Twitter incidents of last year.
When: 7 p.m., Sunday, Jan. 12 at the Downtown Independent.

The Punks: Power Violence
Power Violence is a genre of punk music that takes its abrasive aesthetic to an extreme, kind of like the skateboard-loving comedians of L.A. based comedy troupe Power Violence. Whether they’re beating up an effigy of a monkey or lampooning the faux solemnity of football commentators, Whitmer Thomas, Clay Tatum, Rodney Berry, Budd Diaz, and Jeramy Ritchie are all about shock value—and they’re worth keeping an eye on.
When: 9 p.m., Saturday, Jan. 11 at the Jalisco.