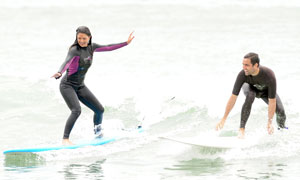 The life of a pro surfer has undeniable appeal. The beach is your office, you spend hours riding nature’s rollercoaster, and the term “board meeting” takes on a whole new meaning. And yet, it’s an intimidating culture. Even with a love of all things ocean that makes it impossible to live more than 15 minutes away from a beach, I was an outsider who always wanted to surf but could never muster the courage.

After two hours of early morning yoga in Laguna Beach alongside my soon-to-be- instructor and a handful of sleepy-eyed actors (hello 7 a.m.!), we headed out on the water. Swimming out on a longboard, it soon became clear why surfers are in such good shape. Surfing burns approximately 200 calories an hour (for a 140-lb. person), and as my sore shoulders can attest to, it uses a great deal of arm and core strength to paddle out past crashing waves.

Eyes gazing over the horizon, my stomach turned with anticipation while I waited for the next swell. “This is it,” said Karina, spotting a surge in the distance. “Start paddling – hard!” My arms propelled me through the water and with a push from Petroni I caught my first wave. A quick jump to standing position and I was surfing like the pros. Well, not exactly. But notwithstanding my clumsiness and lack of experience, it felt natural riding in the wave break. As I passed Whitaker and my fellow students, they cheered me on.  I had successfully left behind my outsider status and learned to surf!

But this wasn’t just a surfing lesson, it was a peek into the whole surfing lifestyle. While I dried off on the beach, pro surfers and their friends lounged nearby, fueling up for their next ride with sandwiches and Muscle Milk. They laughed over shared memories, a handful of “remember when”s hanging in the air. They discussed plans to fly out to Tahiti the next afternoon, chasing the next big wave à la Endless Summer. Oakley’s Ronny Nelson half-joked about leaving for Mexico to catch the “huge swells” caused by Hurricane Alex.

The event came to a close at the Montage Resort in Laguna Beach, where Oakley hosted an oceanside dinner party. Despite the wide mélange of people present, the evening still carried the same laid-back, warm atmosphere of our day on the beach. Friends traded stories about their feats in the water. Singer Kelley James serenaded a group around a glowing fire in an intimate concert, featuring a couple songs from singer Kate Voegele. By the end of the evening, I was hooked.

For those eager to ride their own waves, make sure to check out the July issue for Ann Herold’s take on the best places to learn how to surf. Who knows? I may see you in the line-up.