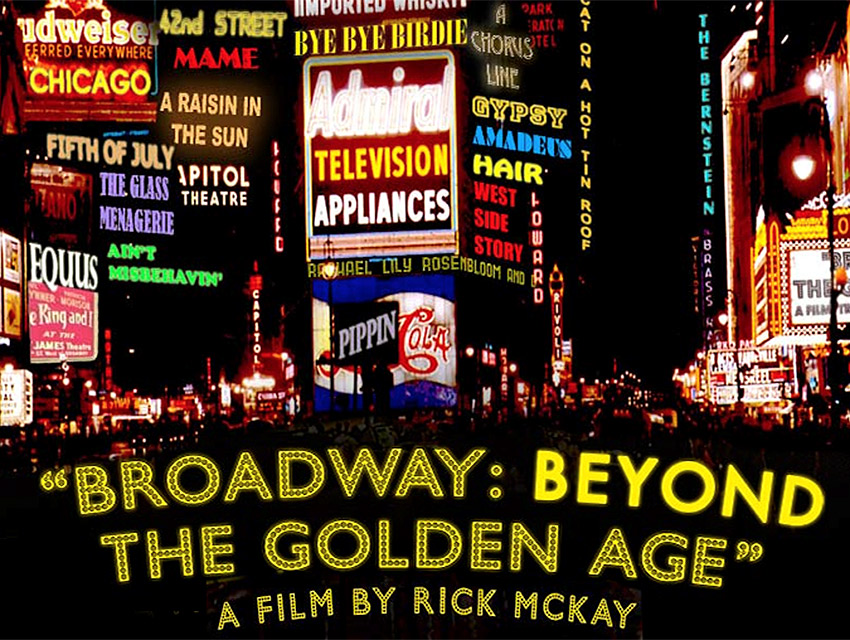 The first screening of filmmaker Rick McKay’s Broadway: The Golden Age from the Legends Who Were There happened more than 12 years ago. At the end of the documentary, there is a teaser for his second film, Broadway: Beyond the Golden Age, which likely left fans itching for more. Now, the wait is over: this week, the Palm Springs International Film Festival offers the world premiere of the McKay’s long-awaited second movie.

“We all said the second film was going to be easier,” McKay says. “It wasn’t. The financial market fell apart. I make the films by myself. It was really difficult to raise money. We don’t get major grants because we don’t do films about animals going extinct. This movie is about Broadway and stars. It was editing and shooting little by little and keeping it all going. It was worth the battle.”

In the first documentary, Broadway’s biggest stars (Bea Arthur, Alec Baldwin, Carol Burnett, Marlon Brando) talked not just about their own careers, but the performances and shows that inspired them. The second film covers shows from the late 1950s all the way through to A Chorus Line becoming the longest running show of all time. McKay’s volume of interviews and his ability to find rare footage means the films start out very long. “I still think that my first cuts at 17 hours are the best,” he says with a laugh. “But I couldn’t find anyone who would book it. I look at editing these films with 100 people’s interviews like throwing a dinner party. You separate husbands and wives so they can have different people to talk to. Since I’m the interviewer, lighting guy, and cameraman, I can say ‘so and so said’ and then eliminate my question and have one person respond to the other.”

For McKay, the most exciting discovery included in the new film is footage of Liza Minnelli subbing for Gwen Verdon in Chicago opposite Chita Rivera. “I didn’t know that Liza replaced Gwen. She was never advertised. I have the full ‘Nowadays’ and ‘Hot Honey Rag.’ I think of that as the Holy Grail in this film. Candy Brown, the ultimate Fosse dancer, did Liza with a Z and Pippin. Thank God she was shooting home movies—her dad had given her an 8mm camera. It shot home movies with sound. Who today could go on stage in Chicago in 5 days, learning the lead role and sing and dance, who is in their 20s who already has won an Oscar and a Tony? There aren’t that many people with that kind of staggering training.”

Philosopher George Santayana’s quote, “Those who cannot remember the past are condemned to repeat it,” inspires McKay. “The tagline for my mission statement is ‘Creating the future by preserving the past,’” McKay says. “I have interns who are theatre majors who don’t know anyone in the film. I showed them a chapter with Liza, [Robert] Redford, Glenn Close, and others, and they didn’t know any one of them. Charles Durning talks about going to the American Academy of Dramatic Arts and being thrown out. He said ‘I stood in the wings and studied people.’ Chita talks about being in the wings and studying [Ethel] Merman. Others talk about standing in the wings and studying Chita. With today’s actors, everyone goes downstairs and gets on their cell phone.”

Finding solace in the theatre as a young boy growing up in Indiana is one reason McKay is doing these films. “I haven’t gotten rich,” he says. “I still owe money on the first film. I did the second because I was worried that someone would make it, and now I’m afraid someone wouldn’t. There are so many of us in small towns all over the world that think they are the only ones who like these things. They go to bigger cities to find others like them. I feel like I’m making this film for the people who never left those towns. Some of these shows and some of these people gave me the courage to find what I wanted. The theatre can do that more than movies often can.”