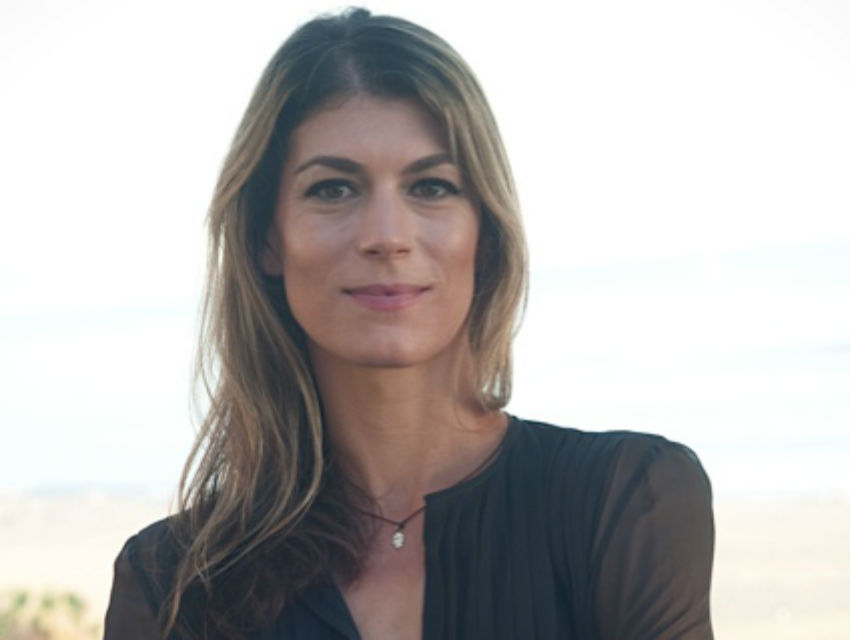 “L.A. is a really private city,” author Alexis Landau muses in the garden of her West L.A. home as her children Lucia and Levi zip by on scooters. “Being an L.A. writer is really solitary and isolating in some ways, as opposed to a place like New York. But I actually think this is a great place to live and write because you are not constantly confronted with other writers and what they’re doing. There’s less of that inherent competition.”

This dichotomy of isolation and community characterizes Landau’s debut novel The Empire of the Senses, a sweeping family epic set in post-World War I Berlin published by Pantheon in March. In The Empire of the Senses, the Pearlmutter family’s internal dramas mirror the turbulent cultural landscape of 1920s Germany. Jewish father Lev, who escaped Russian pogroms as a child, fights for Germany in World War I to assert his patriotism while his wife Josephine submits to Freudian analysis in an attempt to understand her dissatisfaction. As young adults, their children Franz and Vicki seek meaningful identities amidst the debauchery of Weimar Berlin. “It was pretty disconcerting and daunting to write about another city, particularly one as massive and historic as Berlin, while I was living here,” Landau recalls about the process of crafting her novel. “But it was also an escape. I often felt that I had this weird secret life in late 1920s Berlin that only a few people knew about.”

If the author’s focus on private life in public space feels personal, that’s because it is. The child of Jungian analysts, Landau was born on the Westside and has lived here most of her life, departing for a few years to attend Vassar College, complete an MFA at Emerson, and work in publishing in London. “Growing up, I felt everything was discordant here, but now I can see its beauty, and own the disparateness of the city, which has helped me to identify with it,” she explains. “I was commuting to Harvard Westlake on the 405 when I was sixteen. There was intense pressure to succeed. It wasn’t very social because people were working so much.”

This sense of isolation led Landau to seek out a writerly community upon returning to Los Angeles and working for several years at the late great Brentwood bookstore Dutton’s. “Like everything in L.A., it’s harder to find your community here. You do have to work harder for those kinds of connections, but once they fall into place, they are real.” Today, Landau has a PhD from USC and a busy life balancing writing, teaching, and parenting her two children with her husband, a film producer raised in Europe, and strengthening her bond to her home city has influenced the direction of her work: “My next book is set in L.A., in the late 1940s, so I do feel I am getting incrementally closer to home.”

The new novel takes place in the exile community that included composer Arnold Schoenberg, playwright Bertolt Brecht, and novelist Lion Feuchtwanger. Although many of the exiles were Jews, Landau explains, “Jewishness was not really the binding factor. They fled Europe because they were anti-Fascist and horrified with the conditions there, stricken by how the world of artistic freedom and expression had come to a grinding halt with Hitler. All these writers and musicians came here and had to make a living in Hollywood. Some of them felt that it was paradise, others believed it to be a vapid, inane landscape.” This period-specific tension between self and place is where Landau’s interest lies. “Both political refugees and Americans from other states came to Los Angeles with the idea that here you can really rewrite yourself and your narrative, whether you are Jewish, a refugee, or just a guy from Iowa who wants to be a director.”

The idea of L.A. as a place of reinvention and transformation resonates with Landau, who now teaches writing at USC. “I felt like an exile in this city growing up,” she recalls as she makes dinner for Levi and Lucia, who have discarded their scooters to play with blocks. “I was obsessed with foreign films from an early age, convinced that ‘real life’ was happening elsewhere, that Los Angeles was all glitter and surface, that there was no history here.” The sense of unreality that drove Landau from the city as a younger woman has ebbed, she explains: “My view of Los Angeles has really changed.”

“There are two distinct versions of L.A., and now that I’m an adult they’re blending together. When I moved back here when I was 27, it felt distinct, different. Like I was going to redefine it. But now that I have children, I am doing some of the same things with them that I did as a child,” she says, watching her kids tuck into their dinners. “Growing up here, I didn’t really appreciate how awesome L.A. is. Now I think, wow, it’s so diverse. Even the topography is amazing. It took me a long time to love it, because growing up, you don’t know anything else.”

A New Surveillance-Themed Anthology Has Its Eye on L.A.