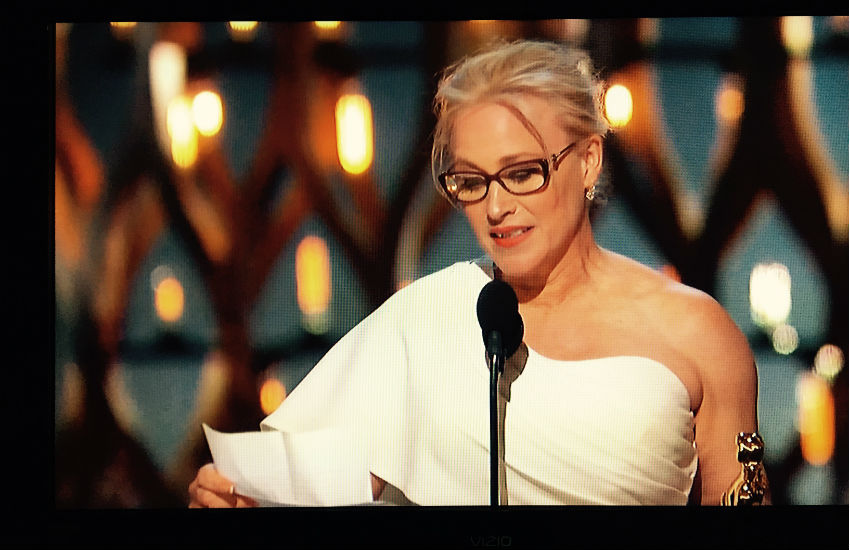 The Oscars are the New Year’s Eve of the film industry: Much hype and then, oftentimes, little to show for it. That was the case last night as the 87th Academy Awards unfurled in rain-soaked Hollywood. We love Neil Patrick Harris and his opening bit, a well-choreographed musical act that ended with a duet with Anna Kendricks, seemed promising, but the 41-year-old first-time host was, disappointingly, off by a couple of degrees throughout the night. His jokes vacillated between comically bad (“This next presenter is so lovely you could eat her up with her spoon: Reese Witherspoon”) and downright cringe worthy (when David Letterman rubbed Oprah the wrong way when he hosted the Oscars, it was at least sort-of funny).

Most of the show’s planned jokes didn’t land. John Travolta and Idina Menzel presented an award together to poke fun at Travolta’s mispronunciation of the singer’s name last year (the Adele Dazeem-incident), but then Travolta grabbed Menzel’s chin while addressing her and we were quickly back to awkward.

One of the biggest surprises last night was Lady Gaga’s medley performance of songs from The Sound of Music (honoring the film’s 50th anniversary). With Lady Gaga you always expect a dress made from cold cuts or a hat that’s actually a live fox, but she left all the gimmicks at home in favor of a classic musical performance carried solely by the strength of her voice.

Despite that high note, what we’ll remember most about this year’s Oscars is a few standout acceptance speeches. This turned out to be the year of raising political and social awareness. Among others Julianne Moore paid tribute to people with Alzheimer’s during her acceptance speech, Birdman director Alejandro Iñárritu spoke about immigration issues, and CitizenFour director Laura Poitras focused on freedom of speech. Here are the biggest highlights:

Arquette was all business when she took the stage to accept her award for Best Supporting Actress for Boyhood. She rushed through a list of acknowledgements without a hitch and then took a left turn into talking about gender inequality: “It’s our time to have wage equality once and for all and equal rights for women in the United States of America,” she said. Arquette got a standing ovation from the crowd and emphatic outbursts of support from Meryl Streep and Jennifer Lopez.

Author and screenwriter Graham Moore (who won the Oscar for Best Adapted Screenplay for The Imitation Game) supplied the biggest tearjerker of the night. Earlier, while accepting the Oscar for Best Short Documentary for Crisis Hotline, producers Dana Perry and Ellen Goosenberg Kent ended their acceptance speech on a plea for more openness about suicide in today’s society. In his own speech, Moore opened up about his suicide attempt at age 16. “I felt like I didn’t fit in, but now I’m standing here,” the writer said, urging young people in a similar situation to “stay weird, stay different.”

With a backdrop of the Edmund Pettus Bridge in Selma, Alabama, where in 1965 hundreds marched for the right to vote, Common and John Legend gave a beautiful and touching performance of their song “Glory” from the film Selma (David Oyelowo who plays Dr. Martin Luther King Jr. in Selma welled up). When later accepting the award for Best Original Song, Legend made an impassioned political statement about racial inequality and justice, saying, “more black men are under correctional control today than were in slavery” and “Selma is now because the struggle for justice is now. We know that the voting rights that they fought for 50 years ago is being compromised in this country today.”

33-year-old British actor Eddie Redmayne took the prize for most adorable Oscars acceptance speech. Redmayne, who won Best Leading Actor for his performance in The Theory of Everything, clearly wasn’t expecting to win. He barely kept it together throughout his speech (at one point Redmayne stopped in between sentences, looked at the statue and just went “wow!”) but managed to accept the Oscar on behalf of people struggling with ALS (like Stephen Hawking, whom Redmayne portrays in The Theory of Everything). “I will be its custodian and I promise you I will look after him, I will polish him, I will answer his beck and call and wait on him hand and foot.”

Anna Kendrick Has a Lot of Feelings About Taco Bell, Emily Ratajkowski, and Sexy Bakeries

The Black Movie Soundtrack Finally Comes Back To the Hollywood Bowl