Home Uncategorized Review: The Tallest Man on Earth Puts His Stake Down at the... 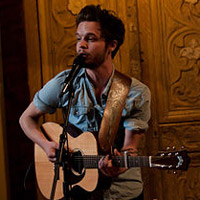 I didn’t immediately recognize him when The Tallest Man on Earth (ne Kristian Matsson) took the stage Tuesday night at the Wiltern. To be fair, quite a bit had changed for the Swedish singer-songwriter since I saw him in April 2011, when he played a sweltering outdoor set at the Coachella Music Festival in Indio. He’d toured Europe, spent months writing and recording, and—finally, just this week—released his fourth studio album, There’s No Leaving Now. Early leaks of the record meant that fans at the Wiltern, including the bad singer sitting behind me, already knew the words to most of the songs.

Save for his gigantic voice, nothing about The Tallest Man on Earth is tall. A bird of a man, Matsson looked as if he could get lost out there in the dark, prop-less set. Then he started singing. Knees locked and bent, he opened with the pretty “To Just Grow Away,” a new song that explores familiar themes (nature, time, loss) but in a softer tone than he’s known for. Matsson is often compared to Bob Dylan because they both possess that ineluctable couldn’t-be-mistaken-for-anybody-else quality, but it’s his open tunings and pitchy sound that really hooks me, so I was relieved when his voice reached up and down from there.

Over the next hour, Matsson delivered a set that bridged newer, more melancholy material like “1904” and “Little Brother” with folk-revival knockouts like “King of Spain” off 2010’s The Wild Hunt. He closed with a stunning encore performance of “Thrown Right at Me,” which he performed with his wife, the equally talented singer-songwriter Amanda Bergman (watch that one below). Played all together, it’s clear that Matsson’s music is made to move to—to drive to, to run to, to explore to—and he’s on his own artistic journey. I hope it brings him back to L.A. soon.