Home Uncategorized Review: The National Ballet of Canada at the Dorothy Chandler Pavilion 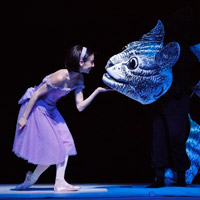 We slipped down the rabbit hole Friday night—and came out the other side marveling at choreographer Christopher Wheeldon’s first-rate production of Alice’s Adventures in Wonderland. In its U.S. debut the National Ballet of Canada (with an assist from Britain’s Royal Ballet) staged five performances this past weekend at the Music Center. Balancing carefully executed choreography, theatrics, set design, and costuming with an original score, the company filled nearly three hours with nonstop spectacle, bringing to life the beloved and bizarre characters from Lewis Carroll’s 1865 novel. Fidgety White Rabbit? Check. Psychotic Queen of Hearts? Check. Wide-eyed Alice? Exceptional. Principal dancer Sonia Rodriguez tirelessly appeared onstage for most of the night, perfectly capturing the mix of playful innocence and bewilderment as she encountered one strange scene after another during her journey.

What made Alice’s experience especially tangible—and put the production on par with anything American Ballet Theatre might bring—were the video projections, three-dimensional props, and live orchestra accompaniment. Each worked together to transport the viewer from the 19th century to the modern digital age. When Alice vanished down a Victorian jelly mold on her way to Wonderland, we were treated to a computer-generated simulation of a tunnel with cascading letters of the alphabet (a clever nod to the story being told). When the Cheshire cat materialized, its body parts spinning and merging and then breaking apart, it was a masterful feat of puppetry. When the percussion section executed composer Joby Talbot’s fantastical score, the chimes and incessant tick-tock made you shiver.

“Curiouser and curiouser!” says Alice at one point in the original tale. Wheeldon’s narrative stuck to that theme. Among the character highlights: The tap-dancing Robert Stephen as the Mad Hatter, every click of his feet mimicking the nonsensical nature of his tea party; Greta Hodgkinson as the devilish Queen of Hearts, her callous disregard for true love finally bringing about her undoing—like the proverbial house of cards collapsing; Guillaume Côté as Alice’s steady suitor, the Knave of Hearts; Jirí Jelinek as the Arabian caterpillar, blowing smoke rings from atop his mushroom; and the darling flamingo mallets and hedgehog balls of the famous croquet game. There was even a bit of slapstick humor in the Queen’s “Rose Adagio” and a hint of menace in a butcher shop scene.

As in The Nutcracker or The Sleeping Beauty, our young heroine awoke at the end, shed her dreamlike state, and found herself on the other side of an adventure. So did we. And what a fun romp it was.