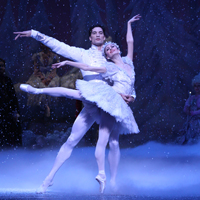 The Music Center hosted the Joffrey Ballet over the weekend, a homecoming for the Chicago-based company that once made its residency at the downtown landmark. How fitting that the troupe was staging founder Robert Joffrey’s Nutcracker, a seasonal favorite that illustrates the notion of going home.

Joffrey’s two-act production—last seen in Los Angeles in 1994 and inspired by the Ballet Russe de Monte Carlo’s version from 1940—featured 42 dancers and more than 60 children onstage as well as the LA Opera Orchestra and the National Children’s Chorus. Of course there was the cast of fairy tale characters we’ve come to know and love: Mother Ginger, the Snowflakes, the Sugar Plum Fairy. There was the magic conjured by Drosselmeyer as he brought dolls and toys to life. There was the joy of the party scene, the dark battle of the Nutcracker and the King of Mice, and the return to innocence with the Waltz of the Flowers. No flourish seemed to be spared as the Christmas tree grew to 23 feet and more than 50 pounds of paper snow fell from the sky.

As elaborate and complicated as these scenes were to orchestrate, though, the choreography of the dance itself remained simple. Victoria Jaiani, who played the title role in the Joffrey’s Cinderella last year, performed flawlessly as the Sugar Plum Fairy. Her moves were crisp and precise, her balance spot on. Temur Suluashvili, as the Nutcracker Prince, stumbled in his solo, but together the pair captured the beauty and tempo of the famous pas de deux that ends the ballet. It’s difficult to listen to Tchaikovsky’s score and not remember how this sequence unfolded so effortlessly by Mikhail Baryshnikov and Gelsey Kirkland in the 1970s. They wowed us then—but so could Jaiani.

Among the other highlights: the series of “divertissements,” the dances—international in scope—presented to Clara after she’s transported from her home to the dreamlike Land of Snow and to the Kingdom of Sweets. She’s entertained by Chocolate from Spain, Coffee from Arabia, Tea from China, Nougats from Russia, and Marzipan Shepherdesses. In the Arabian piece, Kara Zimmerman’s leg extensions and standing splits were the most impressive of the evening. Also, Ricardo Santos—in three roles, including Fritz, the Snow Prince, and Tea from China—was exceptional, his energy never flagging, his turns swift and sharp.

We last see Clara as she boards a hot-air balloon with Drosselmeyer for the journey back home. It’s a moment reminiscent of Dorothy and the Wizard of Oz, foreshadowing how the heroine is about to awaken from a long dream and ultimately set foot on solid ground. Homecomings can be bittersweet—the Joffrey was here for only six performances—but the company proved once again that a touch of make-believe, of suspending reality, of letting the imagination run free, can create a powerful, lasting effect.