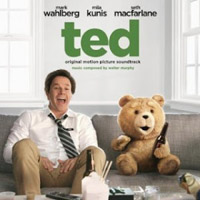 Ripping bong hits with stuffed animals. Using parsnips as sex toys. Calling kids “fat f-cks.” It’s no surprise that Family Guy creator Seth MacFarlane has steered childhood memories into darkly comedic territory with Ted, his first feature film. Though film critics and mucky-mucks have long condemned MacFarlane for his coarse humor, the movie shines because of it. With no network censors holding him back—and the godsend of an R-rating—MacFarlane paints a reckless pastiche of pop culture that lampoons America and flips the coming-of-age story on its head.

When Boston boy John wishes for a best friend, he ends up with Ted (voiced by MacFarlane), a stuffed bear with a major weed habit. Bowl sessions abound as John (Mark Wahlberg) tries to grow up and mend his relationship with his girlfriend Lori (Mila Kunis). Sure, there are lessons to be learned, but MacFarlane avoids the genre’s clichés with crude gags and witty tangential dialogue. Wahlberg sheds his machismo for MacFarlane’s sardonic sentimentality, Kunis plays up the doe-eyed babe persona, and a dozen stars drop in for cameos.

The lynchpin, however, is the bear himself. He’s funny, cute, barbaric, sympathetic, Peter Griffin-esque (and aware of it), loving, and horny. He’s also seamlessly designed. The movie’s CGI team makes Ted look simple, but the character is so cleverly written that scenes of a grown man talking to a bear don’t seem completely absurd. The camera and effects teams deserve special kudos for a pair of unexpected scenes: Ted making whoopee (yes, it happens) and an epic brawl that pays homage to the Peter Griffin/Ernie the Giant Chicken rivalry. With Ted, MacFarlane proves he can write multifaceted characters that transcend the limitations of 2D drawings.

It’s clear that MacFarlane isn’t trying to please anybody. All the hallmarks of MacFarlane’s animated shows—unapologetic non-sequiturs, love of 1980s kitsch, gleeful political incorrectness—are writ large for the big screen. This is a film that is true to its maker, which is also its one drawback. Keeping up with the seemingly endless onslaught of references and celebrity drop-ins can be exhausting. If the notion of an f-bomb wielding Teddy bear offends you, or if political, racial, religious, and sexual jabs make you cringe, this is not your kind of comedy. But if you appreciate the crude and clever sensibility of MacFarlane’s other works, Ted will leave you in stitches.