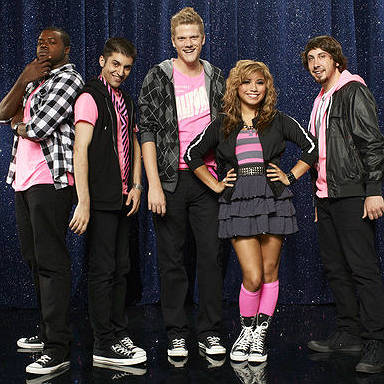 It seems like “a cappella” has somehow become synonymous with the words “nerdy,“ “unpopular,” and “lame”. Pentatonix and The Backbeats would have to disagree.

On Sunday night, these veterans of NBC’s a cappella reality series The Sing-Off put on a show at Universal Studios CityWalk for almost 1,000 people. While both groups performed some oldies—The Backbeats’ Kenton Chen delivered a spot-on impression of Fred Schneider during their rendition of “Love Shack”—the matching outfits and metronomical snapping so often associated with a cappella were noticeably absent.

What’s more, neither group fell prey to the barbershop quartet stigma often associated with the genre. Instead, they filled their sets with crowd pleasers and Billboard chart toppers. The Backbeats’ Rachel Saltzman, a soulful powerhouse, started the night off by soloing Katy Perry’s “Firework.” Pentatonix, at the incessant behest of the crowd, performed their hit cover of Gotye’s “Somebody That I Used To Know.”

Pop music is a specialty of Pentatonix; they are as mainstream as any a cappella group can hope to get. The group consists of the other-worldly Kevin Olusola, a remarkable beatboxer who can recreate most any percussive noise with his mouth, along with Scott Hoying, Mitch Grassi, and Kirstie Maldonado, all of whom produce staggering vocal runs and intricate harmonies, while bass singer Avi Kaplan makes Barry White sound like he’s been huffing helium.

Though they only have five voices, their sound is anything but thin. Due in large part to the expertise of Olusola and Kaplan, listeners might find it hard to believe that they’re hearing a small group of musicians using only their voices rather than a full band.

Each group sang a 45-minute set in front of a screaming crowd, likely a mixture of die-hard Sing-Off fans (ahem), a cappella enthusiasts (double ahem), and innocent CityWalk attendees who had no clue what they were in store for. Regardless, the reactions were uniformly positive: the singers aren’t nerds, the music isn’t irrelevant, and a cappella is anything but lame.

Watch Pentatonix’s version of Gotye’s “Somebody That I Used To Know” here.