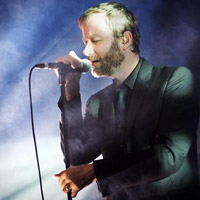 On September 11, Sharon Van Etten and Neko Case opened for The National at the Hollywood Bowl, bringing KCRW’s summer-long world music festival to a close.

Van Etten and her three-person band went first, beginning the night with a short but heartfelt set  that showcased the Brooklyn-based artist’s talent as a singer and songwriter. Her voice may not be as recognizable as Case’s, but few are, and it was nevertheless beautiful on “Don’t Do It” and “Love More,” her critically-acclaimed single about a troubled relationship on which she puts down her guitar for the harmonium.

Case showed up with a kind of hodge-podge band (Lucy Roach filled in for her regular backup singer, Kelly Hogan, who stayed home with the flu) and one very special guest, T. Bone Burnett. Her red hair glowing in the spotlight, Case turned in characteristically strong renditions of “Maybe Sparrow” and “Star Witness,” and an especially stunning version of “Magpie.” There’s a spiritual quality to Case’s voice, and with her neck stretched up to reach the microphone perched a few inches above her mouth, she seemed to be praying as much as singing. “Calling Cards,” a moody love song that bears Burnett’s signature sound, and “Don’t Forget Me,” that “bummer of a Harry Nilsson song,” made me wonder why, despite a loyal fan base, Case hasn’t found a bigger audience.

The National is similar, in that way. Formed in Cincinnati and now based in Brooklyn, the band has more than a decade and five albums under their belt, but they only started getting the kind of attention they deserve a few years ago. Still, the show they put on Sunday night was more big-time rock band than up-and-coming indie group. On a stage set with an LED screen and strobes, the group tore through hits from High Violet and Boxer, lead singer Matt Berninger becoming increasingly unhinged with each song. There’s something distinctly post-modern about The National’s music—it’s soaked in ghosts, heartbreak, and the fragmentation of modern life—so Berninger’s breakdown felt authentic, not overwrought. He broke a mic stand, stood up on the stage monitors, and made it all the way to the back of the garden boxes during a heart-thumping performance of “Terrible Love”—his baritone voice perfectly offsetting the horns and complimenting Bryan Devendorf’s drums throughout.

Of course, it wasn’t just any night at the Bowl, it was the ten-year anniversary of 9/11, and the state and American flags that flank the venue waved at half mast. So when Berninger finally turned the big, black set clock sitting at the base of the stage around so that it faced the audience, its thick red numbers counting down how much longer the band could play, it didn’t just feel irreverent, it felt like a metaphor, a chance to shake off all the sadness and the pent-up anxiety of that date and time. At least for a few last songs.