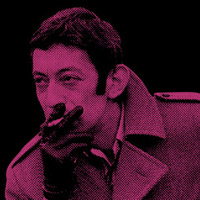 Twenty years after Serge Gainsbourg’s death, thousands of people dropped by the Hollywood Bowl to hear a tribute to the late French music icon.

It was an outsized show. Mike Patton of Faith No More, Victoria Legrand of Beach House, Sean Lennon and Charlotte Kemp-Muhl of GOASTT, Russian American singer-songwriter Zola Jesus, Ed Droste of Grizzly Bear, actor Joseph Gordon-Levitt, and Beck all performed with a band, the Hollywood Bowl Orchestra, and the Cal State Fullerton University Singers. Jean-Claude Vannier, the famous composer and Gainsbourg collaborator who arranged and produced his 1971 hit Histoire de Melody Nelson, conducted for his first time in the United States.

And yet, despite such impressive competition, Serge Gainsbourg was the star of the show. That says quite a bit about the man of the night, and a whole bit more about the artists who came together, putting their own projects, styles, and—let’s be honest—egos aside to let Gainsbourg’s music shine.

Things got started with a mild three-song set by Serge’s youngest son, Lulu Gainsbourg, but heated up from there. Mike Patton nailed Gainsbourg’s particular brand of sex appeal—seductive, menacing, intellectual—on “Requiem Pour un Con” and “Le Decadanse,” a sweet duet he performed with Victoria Legrand. Sean Lennon and Charlotte Kemp-Muhl, who just so happens to look like a Gainsbourg muse, offered playful renditions of “Bonnie & Clyde” and “Je t’aime, Moi Non Plus.” Joseph-Gordon Levitt, who performed two songs from Histoire de Melody Nelson, was perhaps flirtiest of the men, and it worked. Beck, who had a big hand in arranging the KCRW-sponsored show, performed only three songs, and modestly, but his band (together for the first time in a decade), the orchestra, and the Cal State Fullerton University Singers filled every vocal gap.

The Hollywood Bowl program noted selections would be introduced from the stage. Only a handful of them ever were. I don’t think anyone minded. The weather was warm and lovely, the woman next to me had a small dog on her lap (don’t ask, I don’t know), and the audience seemed charmed enough by the French language music.  Save for the reality star sitting nearby, it could have been Paris. It could have been the ‘70s.