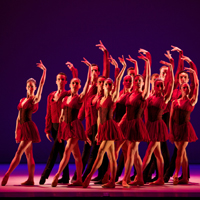 Performing in the United States for the first time in more than 20 years, Scottish Ballet presented two works last week at the Music Center that highlighted the company’s athleticism, artistry, and classical technique. No set, no orchestra, no elaborate costumes. We were treated simply to dance in its purest form, accompanied by the recorded music of Mahler, Mozart, and contemporary composer Steve Reich.

Long arm and leg extensions and clean, crisp turns defined Jorma Elo’s Kings 2 Ends (2011), the first piece on the program. So, too, did playful pantomime as the dancers transformed into puppet-like figures, then shifted seamlessly from robotic to soft, fluid movements. As a group, the women, wearing ballet slippers rather than pointe shoes, were more synchronized—and impressive—than the men. Of special note: the beautiful lines of principal dancer Sophie Martin and soloist Eve Mutso. Elo’s pairing of Mozart’s Violin Concerto No.1 and Steve Reich’s Double Sextet mimicked the fun, lyrical tone of the performance. Here the company proved its versatility and creativity—and did away with any stereotypical notions of men in kilts. Song of the Earth: Photograph by Graham Wylie

The second work, Sir Kenneth MacMillan’s Song of the Earth (1965), was set to Mahler’s somber “Das Lied von der Erde,” whose lyrics were translated from 8th century Chinese poems. With a Messenger of Death wearing all black and a white mask (soloist Christopher Harrison) inserting himself into the various “songs,” or sections, of the program, the piece reflected the interplay of life and death, hope and grief, love and loss. This time the women appeared in pointe shoes. The “3rd Song,” featuring Eva Lombardo, was a standout of the six, with the dancers moving as if on water. Both subtle and intricate, the choreography reminded us why the late MacMillan is one of the most revered choreographers of the 20th century (The Rite of Spring, Romeo and Juliet).

Artistic director Ashley Page leaves Scottish Ballet next summer. How lucky that we got a taste of his troupe’s exceptional talent before he departs.