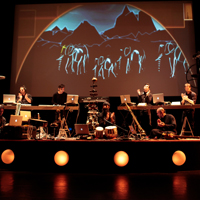 When KarmetiK’s musicians go onstage, they don’t pick up instruments. They turn on their computers. That’s because they’re not part of a traditional orchestra. Theirs is the Machine Orchestra—and they make music with robots.

Last Thursday and Friday marked the most advanced development yet in the history of Kapur’s digital dream—a narrative-driven show at REDCAT uniting ancient Indian musical traditions with the sounds of the 21st century. Sharing the stage with seven musicians, including Kapur, were ten of KarmetiK’s Frankenstein-esque creations, remote-controlled music-making machines with names like MahadeviBot, GanapatiBot, Raina, and Tammy.

MahadeviBot—named after the Hindu word for “Great Goddess”—came first. She (it?) was born in 2005 while Kapur was working on his master’s thesis, “Digitizing North Indian Music,” at the University of Victoria. A student of jazz and Indian classical music, Kapur was always interested in using technology to understand the mechanics of music. “India’s moving into the digital arts now,” Kapur says. “It’s incredible.”

He went on to become director of music technology at the California Institute of the Arts, where he met Michael Darling, head of technical direction in the theater school. At first, Darling, an experienced set designer and sculptor, was skeptical of Kapur’s project. “I’ve never been into kinetic sculpture before,” Darling says. “I thought it was cool, but when it’s unplugged, it just seemed like it was dead.”  But before long, Kapur won him over and Darling was dreaming up grand designs for robot instruments. He admits it almost became an obsession.

“I have this strange, intimate relationship,” Darling says of his electronic babies. “I spend a lot of time with them. Giving them names doesn’t help. You never give a puppy a name unless you want to keep it.”

Although Kapur and Darling have experimented with artificial intelligence, during their show the instruments are controlled by their human operators. When they’re not playing keyboards or strumming on sitars, the musicians onstage issue commands to the robots—begin drum sequence, cue tambourine, go cymbals! The result is a kind of melodic cacophony, easily identifiable as Indian music but distinguished by it electronic sound.

The show, called “Samsara” (a word referring to the death/rebirth cycle of Hinduism), unfolds in seven acts, the middle five representing ancient animal fables drawn from the Panchatantra, an ancient religious text. Stories of mice saving elephants—“Never underestimate people by their appearance,” the moral goes—to foolish monkeys slaying kings are set to Kapur’s brand of Indian music, abstract animations, and Bollywood-style dance sequences. The result is a fusion of many styles.

Much of the show, per CalArts’s championship of artistic freedom, is avant-garde. There are extended sequences where nothing much happens; the narration is mostly in Hindi, not English; and the message isn’t always apparent. That’s the way Darling likes it.

“Samsara” represents a big leap for KarmetiK, which just a year ago debuted their Machine Orchestra to the world with what amounted to an experimental jam session. Their ambitions for the future are great.

The project, planned for three or fours year from now and a complete theatrical show set in 2050 Mumbai, would be called “Electropolis.” “When the audience walks in, the whole goddamned thing is moving,” says Kapur, wide-eyed with excitement. “It’s like you’re entering an installation.”

Before then, Kapur will need to convince more people, including potential investors, that his work isn’t violating a fundamental core of art. Kapur gets asked all the time about the nature of his work. Can robots really make music? Is he replacing humans with machines? What does that mean for the future of art?

But that’s the narrative of our times, he says. And it’s a religious issue as well. Reincarnation, “samsara,” has always been central to the Hindu religion, the notion of returning to earth in a new body, a new form. The root word “incarnare” is Latin for “into flesh.” But in an age of increasing mechanization, is flesh what we’ll be returning to? That’s the question his work ultimately asks. “How are we going to be able to reincarnate into machines?” Kapur says. “Is that even possible?”