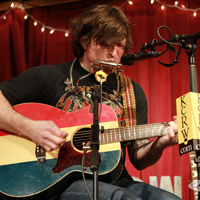 For a guy who has released 13 albums, Ryan Adams has been pretty hard to catch these past few years. After taking sixteen or so months off from playing live shows, Adams started popping up on stages again in 2010. He was the surprise opener for Emmylou Harris when she played the El Rey in April (came thisclose to getting tickets), then announced an intimate gig at the Masonic Lodge in the Hollywood Forever Cemetery just hours before tickets went on sale in October. I know a handful of fans who clicked “search for tickets” in the seconds they became available that day, but no one who actually got one, including yours truly. As I settled in to enjoy the special meal I had prepared to distract myself from my disappointment on the night of that concert (who needs Ryan Adams when you have bolognese?) I found out about the secret show he had played at the Largo the night before, you know, on the one day of the week I hadn’t checked my phone. That plate of pasta ended up tasting an awful lot like self-blame.

Well I saw Ryan Adams perform last night, when he dropped by Apogee’s Berkeley Street Studio to record a set and interview for KCRW’s Morning Becomes Eclectic, and it was as great as I expected.

He opened quietly with “Oh My Sweet Carolina,” a song that sounded just as pretty with Adams and his harmonica as it does as a duet with Harris on Heartbreaker. Then he opened his eyes, tuned his guitar, and sang “Ashes and Fire” the title song off his latest release. There’s something about the way Adams self-manages his volume—he’s quieter, more vulnerable in his high register and louder, stronger when he drops down to the low—that packs a punch, even when you know it’s coming, as I did through “Dirty Rain.”

His set mixed older and newer material, as it usually does, but the highlight may have been “Invisible Riverside,” off Ashes and Fire, which Adams introduced as a song about realizing you can get from the Eastside to the beach on Sunset Blvd. in the amount of  time it takes to listen to AC/DC’s “For Those About to Rock” and “Hells Bells.” It’s classic alt-rock Adams: stripped down but heartfelt, and gorgeously written. At one point the audience was so still, Adams had to ask if we could hear him.

Before closing the show, Adams talked with KCRW host Jason Bentley about his love of Black Metal, what he described as “the beautiful failure of his middle career,” learning to write songs that weren’t so personal they could sour, and what it was like to record Ashes and Fire without computers. He was self-deprecating but lively, and clearly having fun.

Adams will head back on the road in December, and save for this tribute for Bob Mould at WDCH next week, he doesn’t have any future L.A. dates on his calendar—yet. I would (and will) stay tuned. He’ll be back sooner or later, and he’ll be worth waiting for all over again.