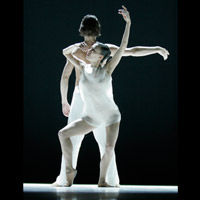 Fifteen minutes before the curtain would go up, the Dorothy Chandler Pavilion remained nearly empty. It seemed that the rain and downtown gridlock had kept the crowds away. But no, like the themes of mystery and suspense often depicted by Nederlands Dans Theater, the contemporary group that’s achieved international acclaim for its innovative choreography, a powerful force was at play: The audience arrived—and would offer a thunderous standing ovation by the final curtain.

The Dutch troupe, founded in 1959 and most closely associated with former artistic director Jirí Kylián, was in town just two days to present two works: The Second Person, choreographed by Crystal Pite, and Silent Screen, choreographed by Paul Lightfoot and Sol León.

A howling wind and looming clouds set the scene for the first performance, in which 24 dancers took part, each wearing dark suits and black-framed glasses. The ominous tone and stark uniformity gradually gave way to notions of self-expression and identity—thanks to a puppet that served as a sort of MC and was manipulated onstage by the dancers. The puppet, resembling one of those anatomically correct wood models used by art students learning to draw the human body, appeared to voice what we were hearing over the sound system: “This is your hand. This is your neck. This is your back. This is a picture of you reaching back.” A person became defined at the most elemental level, and the dramatic last scene—a literal transformation of oneself to a pure form—made the confusing middle segments well worth it.

In Silent Screen, images projected onto three screens behind the dancers took them, and us, on a journey and back. The scenes shifted from outdoors (a beach, a forest) to indoors (a bare room) to outdoors again (a cloud-filled sky, a starry sky)—and then played in reverse—as ten dancers alternately presented solos and duets both intimate and aggressive. Recorded music by Philip Glass created an emotionally charged mood, which matched the exaggerated pantomime by some of the cast during the frenetic sequences. More appealing were the quieter moments, when the music slowed and the movement became more fluid and rhythmic. If the message was that life is cyclical—that we’re part of an evolutionary pattern in which human relationships are forged and break apart, that innocence and chaos intermix—then the piece accomplished its goal.