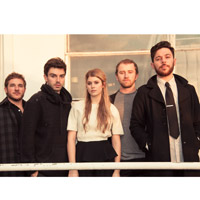 Contrary to the name, Milo Greene is not a person, it’s a band — and one with a sense of humor. The real people in this L.A.-based indie-folk quintet are Robbie Arnett, Curtis Marrero, Andrew Heringer, Graham Fink, and Marlana Sheetz. (They invented the Milo persona to help them book gigs via email.) Last Saturday night they took the stage for a triumphant hometown show at the Troubadour, where they faced a roaring crowd filled with friends and family members who were already clapping along by the first song. The gig was on the band’s bucket list. Although it was their second show at the West Hollywood venue, it was their first time as headliners. They were suitably appreciative and giddy as they called out to parents and friends in the audience.

Part of what makes Milo Greene so interesting is that the band doesn’t have one lead singer — they have four. Except for drummer Marrero, all the players take turns singing lead vocals and playing the various instruments. Heringer goes from bass to banjo. Sheetz moves from keys to bass to acoustic guitar. Arnett plays guitar then keys. A couple of times the band members nearly collided with each other, but they managed to keep the chaos under control even when they were only dashing across the stage to share a quick story. Though the swaps require precise coordination, the band exudes spontaneous joy. The Troubadour show was like watching old friends jam in their living room.

Every one of their finely crafted songs starts with a driving groove. Then the band members exchange instruments and a melodic pop tune blasts off. No matter who sings lead, all their voices combine to create the ethereal harmonies that are their hallmark. Standouts include “Don’t You Give Up On Me” and the show’s closer “1957,” which features great girl-boy harmonies and ended with the crowd singing along to the anthemic refrain: “I’ll go. I’ll go. I’ll go. I.” Along with their own material, it was great to hear the band cover Wilco’s “A Shot in the Arm” from a girl’s point of view.

The two-year-old band whose self-titled first album doesn’t come out until next month (July 17 on Chop Shop/Atlantic Records) already has quite a following. Saturday night’s set, though compelling, felt short. It will be fun to watch Milo Greene grow into larger venues and longer sets. For now, we’ll have to settle for another quick quickie: an in-store at Amoeba on July 17.