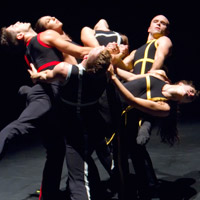 Unlike hip-hop, classical dance has struggled to find an audience in Los Angeles. Quick, cool moves outpace the slow and serious. But this past summer choreographer Benjamin Millepied arrived on the scene, announcing his new dance company—a “curatorial collective” that would not only combine his traditional ballet training with modern and African dance but would showcase the work of contemporary musicians, costume designers, and artists.

It was an ambitious program, with William Forsythe’s Quintett (from 1993) far outshining Merce Cunningham’s Winterbranch (from 1964). In the first, five dancers of the six-member troupe expressed pure grace and raw athleticism. Standouts Julia Eichten and Charlie Hodges moved rapidly and fluidly, joining the cast for lively duets and trios or breaking apart for solos that showed off their controlled poise even as they let loose. Forsythe cleverly juxtaposed the frenetic pace onstage, performed under bright lights, with the monotonous, lulling refrain from Gavin Bryars’s score “Jesus’ Blood Never Failed Me Yet.”

Cunningham’s piece fell (short) at the other end of the spectrum. Confusing and somber—the dancers mostly on the ground, sharp flashes of light punctuating the dark stage—it was especially unnerving thanks to La Monte Young’s “2 Sounds,” a grating soundtrack that recalled “ashtrays scraped against a mirror” and “pieces of wood rubbed against a Chinese gong.” There was no escape for most of the oppressive 16-minute work—except through the side doors, and several folks in the audience took that route.

Millepied’s Moving Parts shifted the mood once more, literally transforming the stage into a gallery space. On view were his modern-balletic choreography; Wool’s painted screens, which the dancers wheeled about; Rodarte’s costumes, black and tunic-like with strips of color; and Muhly’s beautiful organ playing (ah, now we were experiencing the joy of being inside Disney Hall). What a treat.

L.A. Dance Project is already scheduled for an international tour, but let’s hope for its speedy return. This city’s dance culture could use another shot in the arm. Just no more scraping ashtrays, please.