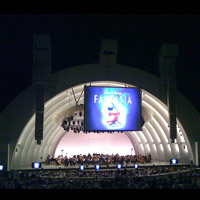 Last week brought two phenomena back to the Hollywood Bowl: Walt Disney’s Fantasia and conductor John Mauceri. Fantasia is of course the animated feature set to classical music and produced by Walt Disney in the 1940s. Mauceri is the Founding Director of the Hollywood Bowl Orchestra. The child of Disney fans who also happened to purchase season tickets to the Bowl in the ‘80s, I can’t say with certainty which I experienced first. It was a treat to see them together now.

The evening started with Bach’s Toccata and Fugue in D minor and a standing ovation to welcome Mauceri back to Los Angeles (he left his post as principal conductor of the Hollywood Bowl Orchestra after 16 years in 2007). “Where have you been?” he deadpanned.

From there, the program moved through Beethoven’s The Pastoral Symphony, Stravinsky’s The Right of Spring, and Dukas’s The Sorcerer’s Apprentice. Scenes from Fantasia played on a large screen perched atop the dome of the Bowl, the colors of each segment slipping beautifully down its sides.

The animations, produced some 70 years ago, don’t seem high-tech by today’s standards, but they are still captivating. It’s easy to see why his role in The Sorcerer’s Apprentice was a career reviver for Mickey Mouse (who happened to make a brief appearance onstage, as well); as the young and lazy hired help of a magician, he has charm to spare.

A ballet of birds, alligators, hippos, and elephants (Ponchielli’s Dance of the Hours), a suite from Tchaikovsky’s The Nutcracker set with fireworks, and two works which were not included in the final cut of Fantasia followed intermission. A pastel and chalk storyboard accompanied Sibelius’s The Swan of Tuonela, and a nitrate print, seen only for the second time, illustrated Debussy’s Clare de Lune.

As usual, the Hollywood Bowl Orchestra sounded great. A bassoon solo by principal Rose Corrigan during The Right of Spring stands out. But one moment turned the night into something more than a nostalgic look back at a style of animation and a conductor from the past. Mauceri asked those musicians who were members of the original Hollywood Bowl Orchestra to stand. Nearly half of them rose. In a day, a time, and a city where so much seems fleeting, that felt like something special.