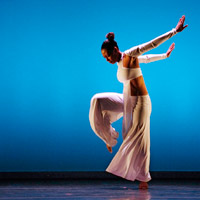 In a departure from the formal, classical dance performances presented at the Music Center, artistic director Ronald K. Brown’s Evidence, a Dance Company arrived last weekend with a repertory program that was set, in part, to the music of Stevie Wonder. The collaboration was a fresh and welcome change for the venue, orchestrated by director of programming Renae Williams Niles.

The Brooklyn-based contemporary group, founded in 1985, combines African dance and spoken word. Movements are not constrained by strict technique; rather, arms wave, hips sway, the approach is big and bold.

The piece Ebony Magazine: to a Village featured the troupe’s nine dancers in their own orbits, self-absorbed, and gradually forming connections to each other. Music by Wunmi included the phrase “do you see what I see” and the sounds of the ocean and birds. Did it mean the dancers were freeing themselves? It seemed so, as three of the women wearing black evening gowns, including the stellar Annique Roberts, changed into lively fuchsia-colored outfits for the rest of the work. The feeling was fluid, unrestrained.

On Earth Together, choreographed to Wonder’s “Living for the City,” “Jesus Children of America,” and “Blame It on the Sun,” seemed to struggle to connect the dance to the music. The costumes were blue-gray drab and dull, a strange choice matched against Wonder’s swelling, upbeat sound. Also, the women were far stronger in ability than the men—some of whom actually wobbled. Here, though, Brown made an appearance, performing solo in the center of the stage, smiling wide as his dancers saluted him.

The last work, Grace, had a spiritual tone that gave way to aggressive forms. For the women, white costuming became red, tracing this theme. Music was by Duke Ellington, Roy Davis Jr., and Fela Anikulapo Kuti. As in the previous two pieces, the dancers remained barefoot, connecting them to the earth and to each other as a community.

Certainly, this tiny group has banded together and formed its own community. To watch the dancers spread across the stage, moving swiftly, arms outstretched, is to watch pure heart and soul and growing talent.