Home Entertainment Industry Review: “Breaking” Features John Boyega at His Finest
Share
Email
Facebook
Twitter
Pinterest
ReddIt
Desperate times create desperate men, and one man’s distress has devastating consequences in Breaking, which tells the true story of Brian Brown-Easley, a former Marine who was shot and killed in 2017 after taking hostages at a bank in an attempt to reclaim a disability payment he believed he was owed by the government.

This is a deeply sad and powerful story, no doubt, but I’m not so sure it’s an important one beyond serving as a lesson in both how poorly this country treats its veterans, and also, how not to go about things when life doesn’t go your way.

Directed by Abi Damaris Corbin, who co-wrote the script with Kwame Kwei-Armah, Breaking is effectively a hostage drama that stars John Boyega (here in a galaxy far, far away from his Star Wars trilogy hero) as Brown-Easley, a man who has been pushed to his breaking point after a check for $892 that he was counting on from the Department of Veteran Affairs never materializes.

We see him struggling to navigate the bureaucracy of that office, and the system at large, which moves like a rolling stone that doesn’t stop or even slow down for anyone, no matter what they’ve done for their country. The long line in the Veteran Affairs office shows that Brown-Easley is far from alone in his bureaucratic nightmare. In dire financial straits and facing the prospect of homelessness, Brown-Easley did the only thing he felt he had left and walked into a Wells Fargo bank in Marietta, Georgia, armed with a gun and took a handful of innocent hostages in an effort to be heard. 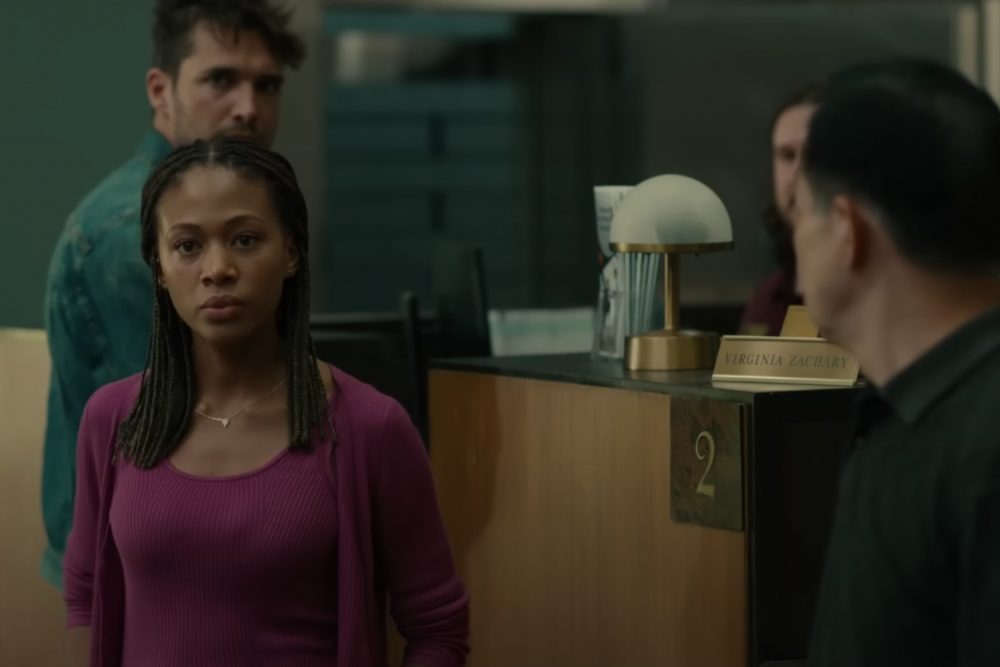 Corbin and Kwei-Armah adapted the script from Aaron Gell’s 2018 Task & Purpose article, “They Didn’t Have to Kill Him,” which lays out the case for a less violent resolution. But watching the film, it’s still difficult to imagine how a man entering a bank with a gun and taking hostages could fathom any other way things will end for him.

Still, Brown-Easley is a very sympathetic bank robber—even though he’s not out to actually rob the bank. It’s not about the money. Heck, the cops outside could probably have pooled together $892 from their wallets and called it a day. The bank could be any place at all, really. This is a man who needs to make a statement, because, for Brown-Easley, it was about the principle of his situation. It was a small clerical error that is threatening to put him on the streets and wreak havoc on his family so this is about the disrespect he feels he is shown; his principles, however noble they may have been, are ultimately what led to his death. A true tragedy.

Breaking co-stars the late Michael K. Williams in one of his final performances before his untimely 2021 death. But The Wire favorite is on the other side of the law this time, playing the lead hostage negotiator trying to relate to Brown-Easley and convince him to exit the bank without incident. Jeffrey Donovan appears as his boss, while Connie Britton plays a sympathetic reporter, though neither makes much of an impression here. More successful are the actors portraying the hostages, including a brave bank manager played with grit by Nicole Beharie and a teller played by Selenis Leyva, who makes the most of her limited screen time.

The soulful Williams delivers another strong turn, as usual, though it’s Boyega who commands the screen here in his finest feature performance yet. He’s particularly impressive during an emotional phone conversation with his little girl in the bank’s bathroom towards the end of the film. We are shown Brown-Easley as a loving father providing a further window of sympathy for his plight—though we know it will be rewarded with bloodshed.

Boyega actually replaced Lovecraft Country star Jonathan Majors here because of the latter’s scheduling conflict with the third Ant-Man movie. While I can certainly imagine Majors making a meal of this role, I’ve found that movies typically get made with the right actors in place, and in the end, I’d say this swap worked out well for Breaking, whose leading man rises to the occasion. The ensemble cast as a whole actually won a Special Jury Award earlier this year at Sundance, where the film was acquired for theatrical release by indie distributor Bleecker Street.

Corbin does a serviceable job with the tense material, effectively delivering a cross between Dog Day Afternoon and Falling Down, but with a Black man in the lead role. You can practically feel the Georgia heat radiate off the screen, lending authenticity to the nerve-wracking proceedings. However, the unfortunate behavior of certain characters makes little sense as the story continues and in the end, the somewhat predictable Breaking fails to deliver the emotional punch of something like, say, Fruitvale Station—the true story of a police shooting that did strike me as important. Breaking is also a little too bogged down with run-of-the-mill negotiator plot and other minutiae that should’ve been cut. This could have winnowed the running time from 103 minutes down to something closer to Fruitvale‘s tight, effective 85-minute runtime. Despite a tightened opening, the edit hasn’t changed since Sundance, and additional scenes with Boyega and Williams have been added.

Clearly, the risk he took that day wasn’t worth it for Brown-Easley, who paid dearly for his decision and will now see his memory and the maddening circumstances he found himself in at the end of his life live on through this film. Adding further insult to injury, his family never did get that payment. They did, however, consult on this movie, which is worth viewing as a strong calling card for both Boyega and Corbin—even if it doesn’t add much to the vital conversation surrounding police killings or how the U.S. treats its veterans.