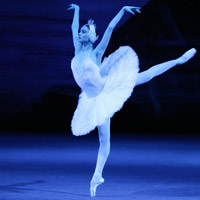 The story of a tragic bird packed the house at the Music Center last night. (And no, it wasn’t because of California’s upcoming ban on foie gras.) The crowd poured into the Dorothy Chandler Pavilion to see a remarkable, finely executed production of Swan Lake by the Bolshoi Ballet. The company performs here through Sunday.

Call it Black Swan mania. Call it Benjamin Millepied fever (the film’s choreographer debuts his L.A. Dance Project at Disney Hall in September). Whatever it is, this 2001 ballet conceived by Yuri Grigorovich—and based on the 19th-century version by Marius Petipa, Lev Ivanov, and Alexander Gorsky—is the ballet of the moment. Classical Russian technique, elaborate sets and costumes, a love story gone awry: The performance had all the right elements, and I found tears streaming down my face as the dancers took their final bows. It’s that moving.

Anna Nikulina, in the lead role of Odette (the white swan) and Odile (the black swan), carried the production on opening night. She gave a flawless performance, from tilting and shaking her head like a graceful feathered fowl to powering through the famous series of fouettés that have long defined Act 2. Semyon Chudin’s turn as Prince Siegfried was more disappointing. His leaps were grand, his spins were seamless, but something seemed lackluster, as if he didn’t fully own the stage. More memorable were the swan formations—a gorgeous feat of symmetry and unity. The solo of the Four Swans, who interlock their arms and perform in a perfect line, was particularly impressive.

You could hear Russian rolling off the tongue as the audience made their exit. Then in English you could hear words like “fabulous,” “breathtaking,” and “pretty amazing.” The Bolshoi, which was founded in 1776, still proves to be one of the greatest ballet companies in the world. What a treat to see them here. Just bring some Kleenex.