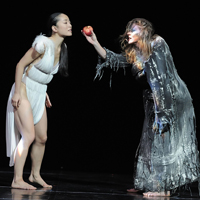 If you’re not familiar with Ballet Preljocaj, that may quickly change. The French dance company swept through the Dorothy Chandler Pavilion over the weekend with an extraordinary performance of Snow White (Blanche Neige). Set to the dark, stirring music of Gustav Mahler and featuring costumes by Jean Paul Gaultier, the production fused contemporary and classical dance with innovative set designs and an edgy, grownup vibe.

Since founding the group in 1984, artistic director Angelin Preljocaj has created 46 pieces and toured worldwide. Many have been restaged by others, and he’s collaborated with numerous choreographers. The raw, modern style of Merce Cunningham, with whom he personally studied in New York, is evident in his work. And yet there is also an elegance, a grace, a traditional sensibility, as depicted in his Snow White.

After a theatrical opening scene—in which Snow’s mother gave birth and died alone on a smoke-filled stage—a formal, classical court scene showed Snow, now a young woman, and her father being celebrated as they sat on elevated thrones (we actually witnessed them rise; it was a clever bit of engineering). But what followed was unlike anything I’ve seen in a ballet production. Without an intermission and 90 minutes long, the performance was as much a Greek or Shakespearean tragedy as it seemed to rival the talents of Cirque du Soleil.

The Queen (Gaëlle Chappaz), outfitted in what could pass for S&M wear (a black cape and wide red hem, thigh-high tights and heels), studied her reflection in a massive gold-framed mirror attached to a curtain. From the seats the audience could see her visage come and go—another creative engineering touch. The seven “dwarfs” were more like Boy Scouts, wearing shorts and miners hats that beamed with amber lights, as they glided up and down a rock wall and did exquisite aerial acrobatics in sync. Snow White (Nagisa Shirai) and the Prince (Fabrizio Clemente) performed flawlessly, not an easy feat considering the athletic choreography and especially noteworthy in the scene in which our heroine went limp and lifeless after being forced to bite the poison apple. In fact, that single moment—when the Queen thrust herself at and then on Snow White to kill her—was both a violent and surprising, strangely erotic move.

It worked. Preljocaj took the Grimm Brothers fairy tale, added his own twist, and left us in awe. Bravo.