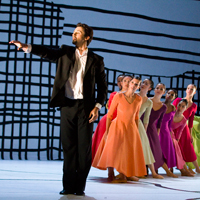 The classical and the contemporary shared the stage at the Music Center over the weekend as Ballet du Grand Théâtre de Genève arrived with three pieces by Benjamin Millepied, the former New York City Ballet principal who choreographed the film Black Swan. He and Paul Cox, who oversaw the scenography and costume design, brought a modern sensibility to the performances, each of which have historical roots.

Amoveo was first created for the Paris Opera Ballet, and its theme of love stems from the Latin word moveo: to set in motion. This was literally reflected in the dancers’ dizzying combinations, the men and women spinning in twos and threes, dressed casually in bright T-shirts, tank tops, stretch pants, and miniskirts. Their lime green, yellow, blue, and red outfits provided splashes of color that mimicked the digital painting of crisscrossing lines that appeared on a screen behind them. Connection, disconnection: These conceits are often explored in dance. But this presentation was refreshingly unfamiliar, set to the music of Philip Glass.

Le Spectre de la Rose was a reinterpretation from the Ballets Russes, based on a 19th-century poem. Here Millepied introduced three masked men on a cubist-inspired set (all bold colors and angles) who attempted to seduce a sleeping young woman. Their bravura moves and hip thrusts and general flamboyance were playful and comedic. The woman, Sarawanee Tanatanit, did her best to perform while “asleep”—eyes closed, body limp—but in no way did she approach the skill of Nagisa Shirai’s Snow White in Ballet Preljocaj’s production at the Music Center last month. Still, it was a spirited second act, thanks to the men’s theatrics.

The final piece on the program, Les Sylphides, also goes back to the Ballets Russes. In this version, the women wore long simple dresses in feminine pinks, peaches, and violets, a contrast to the black-and-white backdrop. Eight short scenes touched on the ideas of gender roles and community. As in the previous two pieces, the women wore soft ballet slippers; this company of 11 women (and 11 men) does not use pointe shoes. That aspect seemed to emphasize the point: Contemporary met classical, and it was a successful match.

Up next at the Music Center: The Bolshoi Ballet in June, performing Swan Lake. (Yes!) Also, the 2012/2013 dance season was just announced. Click here for more information.