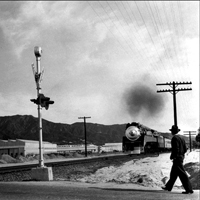 If you’ve ever wondered what Los Angeles looked like 70 years ago, don’t miss the opportunity to immerse yourself in the collection of photographs by Ansel Adams from the archives of the Los Angeles Public Library on display at the drkrm gallery through April 21. The influential photographer, known for his iconic black-and-whites of Yosemite, shot a series of images capturing everyday life in Los Angeles whil on assignment for Fortune Magazine in 1940. He donated them to the library 20 years later.

The series, shot for an article about the aviation industry titled “City of the Angels,” shows the lost landscape and lifestyle of a pre-war Los Angeles and pays special attention to the employees of Lockheed Burbank Aircraft and Douglas Santa Monica Aircraft. Adams followed some home to the Olympic Trailer Court in Santa Monica and shot several un-posed photographs that offer a window into their day-to-day lives as they sit on the porch, put up laundry, and grab a bite to eat on a lunch break.

The show features shots of structures that are no more, from wistful service stations to the charming Brown Derby, as well as buildings like City Hall that we still treasure today.

Some favorites include a signature shot of a palm tree-lined street with apartment complexes of different architectural styles and photographs of the Ocean Front Promenade. Pictures of cars cruising down Beverly and Wilshire Boulevard will make you want to hop in your car and head to the beach. And if the streets look the same, the pictures also make clear how much above them have changed.