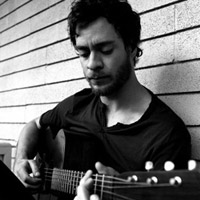 It’s far from the coolest way to meet a musician, but I’ll admit it: I discovered Amos Lee through Sirius Radio’s Coffeehouse. When regular TV-programming isn’t on at my house, channel 836 often is. A hub for “singer-songwriters—unplugged,” it’s easy to listen to while doing other things.

Amos Lee’s recent hit, “Windows are Rolled Down,” made me look up to catch the credits,  so I checked out his weekend show at the Orpheum downtown excited to get to know him and his music better. Here’s what I learned:

1. I’m About Six Years Late to His Fan Club.
Lee has released four albums on Blue Note Records (the last of which, Mission Bell, debuted at #1 on the Billboard 200), and he has opened for, among others, Merle Haggard, John Prine, and Bob Dylan—some of the very best singers rooted in the Americana tradition that informs Lee’s soul-folk sound. Last year he performed for the first family on the White House lawn and is slated to open for Adele when she tours Europe this fall.

His four albums gave Lee plenty of material to pull from Saturday night, but he stuck closely to Mission Bell, giving spirited performances of “Hello Again,” “Behind Me Now,” and “Flower.” “Keep it Loose, Keep it Tight” is off his self-titled debut, but its laid-back message feels and sounded fresh.

2. He Can Sing—Really.
Lee’s voice, which is instantly recognizable over the radio, is deeper, stronger, richer live. He can begin a lyric in a growl, then end it in a falsetto whimper, and although his band sounded great, the songs he performed solo—“Out of the Cold,” written for a wounded vet, and a cover of Paul Simon’s “American Tune”—were the most moving.

3. He’s a Musician’s Musician.
Between songs Lee talked about writing music in the recording studio and being inspired by music outside the folk-rock genre. Openly fond of Calexico, his opening act and the band of one of Mission Bell’s producers, Joey Burns, Lee welcomed them back to the stage to join his band for a couple of numbers, including a well-done cover of “Something” by the Beatles. I wasn’t surprised to learn later that another musician, Norah Jones’ sometime bassist, Lee Alexander, produced Lee’s debut.

4. He’s a Hit With the Ladies and the Fellas.
Between acts, a group of girlfriends chatted over the bathroom sinks. “Is he black?” asked one of the girls. “I think he’s part something,” said another. “Well, he’s all fine,” said the third. “He’s gonna make you cry,” said the first. “You’re just going to break down and cry.”

Later, in the top of Lee’s set, two guys seated mid-venue stood up to sing and sway. Another, front-row center, rose and threw his arms up near the end. I don’t know if anyone cried, but they certainly enjoyed themselves. And not in a what-great-background-music kind of way.