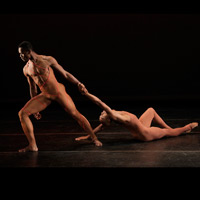 The mark of an exceptional dance company hinges not only on fine technique and creative choreography, but also on stylistic range. Each of these factors—and most notably the last—was on display Wednesday night at the Music Center, as Alvin Ailey continued its ten-performance run through Sunday.

The first two-thirds of the program differed from Friday night’s (see our previous review here), with two outstanding pieces that showed off the company’s artistic scope. Love Stories, choreographed by Judith Jamison (the outgoing artistic director) with Robert Battle (who will be taking her place) and Rennie Harris, included the familiar, catchy tunes of Stevie Wonder, Clarence Paul, and Henry Cosby. Jamar Roberts performed an opening solo, full of strength, athleticism, and control. From there a colorful cacophony of dancers, ten in all, took to the stage for a series of spunky, seemingly free-form moves reminiscent of street dance. Polished and poised even as the music quickened and the acrobatics became more intricate, the dancers expressed the pure fun and boundless joy of dancing. If you were in the audience, you wanted to get up and follow along.

The second segment, Forgotten Time, was choreographed by Jamison in 1989, the year Alvin Ailey appointed her to her post. Music by Le Mystere des Voix Bulgares accompanied the piece, which was a somber celebration of the human form—sometimes, in fact, performed in silence. Slow, thoughtful, and deliberate, it was the antithesis in pacing and mood of Love Stories. The dancers, wearing nude-colored leotards with piping, huddled together to create statuesque shapes, or they broke off into small groups or performed duets that were raw, bodies intertwined. “Oh my God, how can he do that?” whispered someone in the audience as one dancer performed a feat of flexibility. The lighting, by Timothy Hunter, was particularly beautiful (shadows, outlines) in setting the scenes.

The crowd-favorite Revelations ended the evening, and in the short film shown beforehand, Jamison remarked on the inspiration behind Ailey’s choreography 50 years ago: “If you were a dancer and an African American, my God you had a lot to say—because your story wasn’t being told.” She explained that the moves Ailey fans love today (arms outstretched reaching to the sky, hips swaying like a rippling river) reflect the transformative nature of the African American experience: “We’re joyous in that we see hope from despair.” And in that regard—in showing such breadth—the company continues to resonate with its audience. We hope it returns soon.